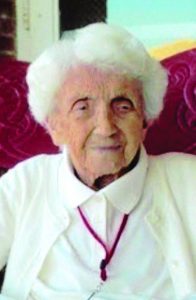 Geneva Louise Knifley Spires, 91, of Columbia, Ky died Tuesday, February 25, 2020 at the Hospice House of Southern Ky in Bowling Green, Ky.  Born in Knifley, Ky she was the daughter of the late Wallace and Hallie Chelf Knifley.  Mrs. Spires married the late Robert Spires on August 23, 1946.

Louise was a member of the Columbia Christian Church and former owner and operator of the Country Corner Store and formerly worked with the Lake Cumberland Head Start.  She was known for her delicious cooking and loved reading and sewing.

In addition to her parents and husband she was preceded in death by a brother Ivan Knifley and his wife Yvonne and a son in law Fred Blair.

Funeral services were held Saturday, February 29, 2020 at the Stotts-Phelps-McQueary Funeral Home with burial in the Haven Hill Cemetery.

In lieu of flowers donations may be made to the Adair County Public Library and can be left at the funeral home.