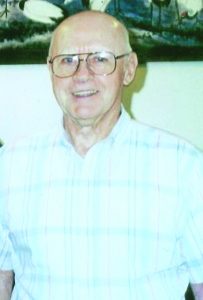 He was born December 23, 1923 in Greenwood, Ind to the late Luther and Effie Bottom Womack.  In addition to his parents, he was preceded in death by his wife, Flora Mae Koch Womack in 2017, two brothers, Charles and Paul Womack, and one sister, Norma Ivaskewitz.  Garnett was a United States Army and Coast Guard Veteran, having served during WWII, and a member of the VFW & DAV.  He attended Columbia Baptist Church, was retired from Fruit of the Loom, an accomplished carpenter and a man of many different talents.

In accordance with Governor Beshear’s recommendations and in compliance with the CDC, the funeral service will be held for the closest family members and a private burial will be held in Campbellsville Memorial Gardens.

For friends wanting to share in the celebration of Garnett’s life, the funeral service was recorded and uploaded for viewing on our website.  Also, for anyone who would like to leave a condolence message for the family, please visit Mr. Womack’s obituary on our website (www.grissommartin.com) and we will see that the family receives it.