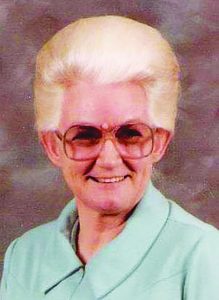 She was born August 10, 1924, in Adair County, to the late Elbert and Ada Janes Burbridge.  In addition to her parents, she was preceded in death by; her husband, William Bennett, four children, Phillip, Glen and Ronald Bennett and Barbara Madsen; three sisters  Racine Miller, Virginia England and Natrie Frankum.  Ms. Bennett was very active in her church, Landmark United Pentecostal Church, in Glasgow.