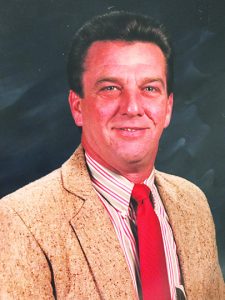 The Columbia, Ky native was born on November 23, 1949, in Columbia, Kentucky, the youngest of four children and only son.  Ralph was a 1968 graduate of Adair County High School and received both his Bachelor’s and Master’s degrees from Western Kentucky University where he was a member of Pi Kappa Alpha Fraternity.

For many years, Ralph owned Shelter Insurance agencies in Columbia, Ky, and later Campbellsville, Ky, before returning to his first love, teaching.  He was an exceptional educator for the Adair County Board of Education, working in the Learning and Behavior Disorders (LBD) special education program.  For over 20 years, Ralph owned Bernard’s Body Shop, where he was a master in meticulous and artful auto-body repair and restoration—his talent and passion.  In 2000, Ralph was involved in a motorcycle accident in which he sustained a massive traumatic head injury.  Overcoming certain death and months of rehabilitation, Ralph returned to teach for two years before eventually retiring.

Ralph loved life and lived it with passion and zeal.  He loved University of Louisville Cardinals sports, good music (on cassette tapes), traveling, cars and motorcycles, Three Musketeers bars, and above all else, his family.  His children were the axis of his world.  He was a friend to many and a stranger to none.  He had a disposition that made you an instant friend upon meeting him, and he deeply valued his friendships, both old and new.  Ralph spent his life advocating for children, especially those who needed a voice and a champion.  He had a particular love of children with critical and terminal illness, having lost his son, Joseph, to Progeria.  Over the course of his rich seventy years of life, Ralph received a multitude of business and professional honors, championed youth-service causes, volunteered for The Sunshine Foundation for two decades, gave of his time to any who needed it, quietly and without expectation.  Of all he accomplished on this earth, he always noted his greatest as his children, Liz and Jo-Jo.

He is survived by; his wife of 41 years, Betty Ervin Bernard of Bowling Green; his daughter Elizabeth Bernard (Jim Clark) of Bowling Green; two sisters Patty (Allen) Green of Columbia, and Alice Faye (Everett, deceased) Wheeler of Columbia; and a host of nieces and nephews.  He was preceded in death by; his son Joseph Ralph Bernard and his sister Joann Bernard Darnell.  He was the son of the late Olis Raymond Bernard and Lena Inez Bernard Roden Visitation will be held on Thursday, February 13, 2020, from 4:00 p.m. to 8:00 p.m. at J. C. Kirby & Son Lovers Lane Chapel in Bowling Green, KY.  Visitation will be held at the Church of Jesus Christ of Latter Day Saints the morning of Friday, February 14, 2020, beginning at 10 a.m., with funeral to follow at 1 p.m. Dedication of the grave and burial will follow funeral services at the LDS Cemetery in Sulphur Well.

Expressions of sympathy may be made to the Boys & Girls Club of Bowling Green or St. Jude Children’s Research Hospital.

The obituary is a courtesy to the family by Stotts-Phelps-McQueary Funeral Home.