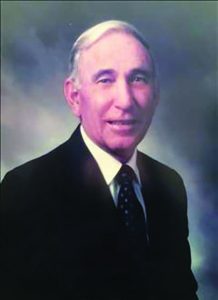 Kenneth N. Ballou, age 94 of Burkesville, Ky passed away on Thursday, January 30, 2020 at Cumberland Valley Manor . Kenneth was born on June 13, 1925 in Adair County, Ky to the late William Murray “Bill” Ballou and Mattie Florence Garrison Ballou. As a young man Kenneth served in the U.S. Army 9th Division, 47th Infantry Regiment, 3rd Battalion, K Company during World War II where he received the purple heart with one bronze cluster, the Distinguished Service Medal, and the meritorious unit award with one bronze cluster. After returning home he attended and graduated from the Kentucky School of Embalming in 1948 and was licensed by the board in 1949. He was one of the oldest license holders in the state, receiving his 70 year certificate in 2019. In 1950 he and his wife Stella moved to Burkesville, Ky and founded Ballou Funeral Home in Burkesville where he served families for many years.

He was a member of Burkesville First United Methodist Church, VFW Post 5419, American Legion Post 119, Past Master of Cumberland Lodge #413, a former board member of Cumberland County Hospital, Cumberland Valley Manor, Burkesville Cemetery Board, and other numerous organizations. Kenneth loved buying, collecting, and selling antiques and was an avid checker player.