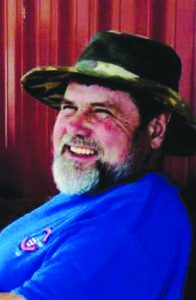 Donnie Perry, 62, of Sparksville, Ky and formerly of the Grab Community of Green County died Sunday, February 2, 2020 at T. J. Health Columbia.  Born in Louisville, Ky he was the son of the late Hayden and Delma Judd Perry.

Donnie graduated from Green County High School in 1976 and was a member of the 1975 Green County Regional Championship Football Team; he was also a graduate of Western Kentucky University majoring in Art.  He retired from the Cabinet for Health and Family Services and worked part time for Premier Integrity Solutions.

Donnie owned G.R.A.B. 1 Pottery and was a highly skilled Potter.  He enjoyed football, fishing, going to the river and spending time with his family.  The big laugh and a smile will be an everlasting memory of Donnie.

In addition to his parents he was preceded in death by; his father and mother in law Junior and Shirley Walker and a sister in law Marileen Perry.

Funeral services will be 11:00 a.m. Saturday, February 8, 2020 at the Stotts-Phelps-McQueary Funeral Home with burial in the Sparksville Baptist Church Cemetery.

Visitation will be on Friday from 4:00-8:00 p.m. at the funeral home and continue Saturday morning until time for the service.