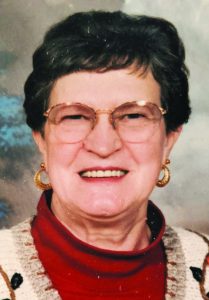 Mary Annis Feese Cooley born September 28, 1933, went to be with our Lord on Tuesday, January 14, 2020 at 86 years, 3 months, and 16 days of age.  She was the first of three children and was preceded in death by; her parents, Earl and Verna Ferrell Feese; one brother, Clifton Feese; and one son in law, Frank Kologinczak.  She married Calvin Christie Cooley on December 23, 1950, who preceded her in death on September 28, 2019.

Mary was a member of the Plum Point Baptist Church where she attended faithfully and enjoyed being a part of the music program.  She attended Egypt Christian Church most of her adult life where she taught Sunday School and led singing. She was renowned for her knowledge of the Bible, often recruited for discussions. Mary Annis was a founding member of the Egypt Gospel Quartet and anyone who knew her understood she was passionate about gospel music, especially four part harmony. They blessed countless people throughout the years with live shows at various venues, published recordings, and a live radio program featured on WAIN for many years. Second, only to her love of the Lord, was her dedication and love for family and community.  Mary retired from Fruit of the Loom in Campbellsville after 44 years of dedicated service.

She is survived by; two daughters, Jean Corbin and husband Terry of Columbia and Lois Kologinczak of Texas; three grandchildren, Cyndi Skains and husband Jerry of Texas, Mitch McKinley and wife Angie of Texas, and Jason Claywell and fiancé Rebecca Ball of Somerset; four great grandchildren, Sara and Hanah McKinley, Lauryn and Corwyn Skains; one brother, Alton Feese and wife Hilda of Columbia; one nephew, Lewis Feese and wife Natalie; and one niece, Nan Coleman and husband Chris. Mary and the family have appreciated the love and support from special care givers, Anna Burton, Monica Pierce, and Rosie Edwards.

The family requests expressions of sympathy be in the form of donation of Gideon Bibles or to Hosparus of Green River.  These may be left at the funeral home.