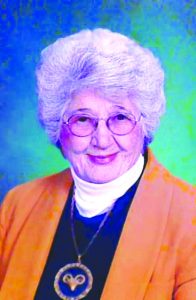 Dorothy Mae Shelley, 95, of Columbia died Tuesday, January 21, 2020 at the Summit Manor Nursing Home.  Born in Greensburg, Ky she was the daughter of the late Frank and Lorraine Squires Thompson and wife of the late John Marshall Shelley Sr…

Mrs. Shelley was a member of the Columbia United Methodist Church and a former employee of First and Farmers Bank, formerly known as First National Bank of Columbia where she gave 44 years of service to the citizens of Adair County.  She loved gardening, quilting and working outdoors in her yard.

In addition to her parents and husband she was preceded in death by a sister Peggy Mitchell.

Funeral services will be 11:00 a.m. Saturday, January 25, 2020 at the Stotts-Phelps-McQueary Funeral Home with burial in the Haven Hill Cemetery.  Visitation will be on Friday from 4:00-8:00pm at the funeral home and continue Saturday morning until time for the service.

Rev. Bill Davenport and Rev. Rob Hoffman will be officiating and pallbearers will be her grandsons and great grandsons.

In lieu of flowers donations may be made to Green River Hosparus or the Columbia United Methodist Church.  Donations may be left at the funeral home.