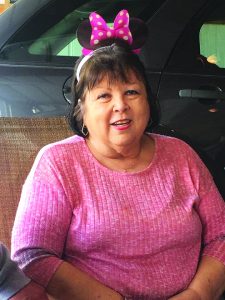 Linda Sue (Branham) Holland, 66, of Louisville, left this Earth on January 2, 2020 to join her Heavenly family.

She was born in Louisville, Ky to the late Walter Raymond Branham and Doris (Janes) Braham. Linda was raised both in Louisville and Breeding, KY. She was the youngest of their three children.

Linda’s life was dedicated to her family and she loved her friends like they were family. She worked as a professional tax preparer, enjoyed her monthly outings with her two bunco groups, her south and east end bunco girls. Her children and grandchildren received more love from her than most people ever know in their lives. She called, she showed up…even if you weren’t expecting her.

Linda’s life was filled with bling, the color purple, sequins, and to her daughter’s frustration, lace.  She will be missed immeasurably.

Funeral service were officiated by her cousin Bro. Larry Wisdom,  Monday, January 6, 2020 at the Owen Funeral Home in Jeffersontown,  Ky. Burial to followed in the Cave Hill Cemetery.