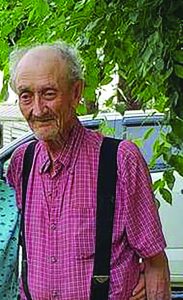 Cashius Ray Beard, 84, of Columbia, died Wednesday, December 11, 2019 at the University of Louisville Hospital as a result of an automobile accident.

He was born June 2, 1935 in Adair County to the late Cashius Daniel and Vesta Elizabeth Beard.

In addition to his parents, he was preceded in death by several siblings.  Cashius was a sawmill and construction worker.

Burial followed in the  Milltown Cemetery.