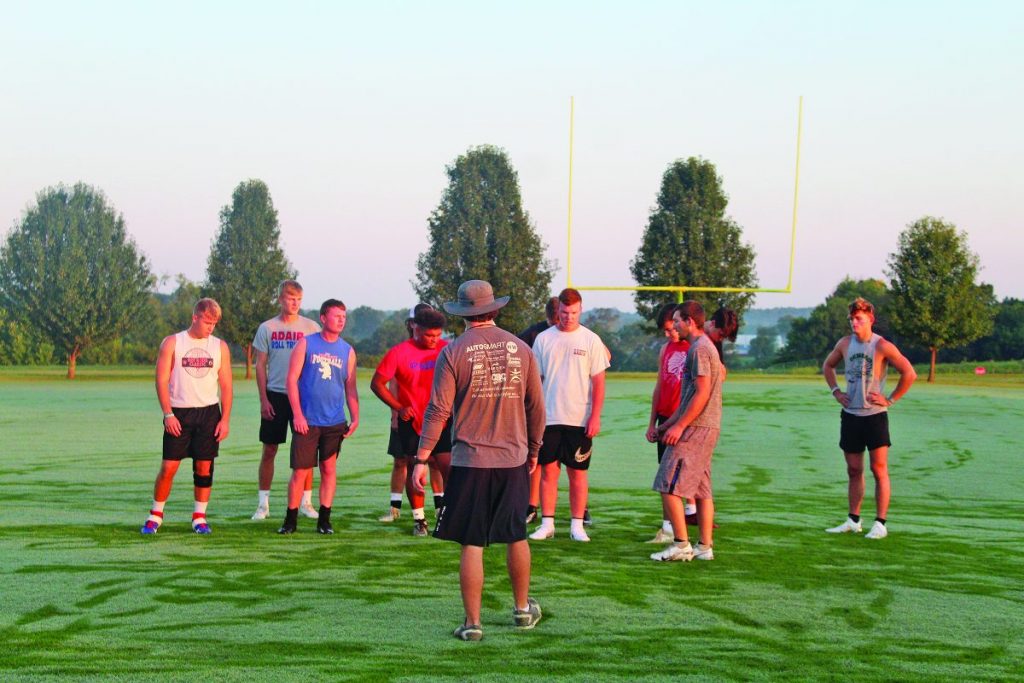 Tomorrow night the Adair County High School Indians will travel up the road to Edmonton to face the Metcalfe County Hornets and complete a journey the team has been working toward since last November.

Following the team’s district playoff loss at Glasgow, head coach Van Isaac said that he wished the team could get back to work right away. He had grown as a coach through his first season at the helm and had seen his players grow through their time together.

The team broke for the season, with some of the players joining the basketball team and others gearing up for track.

At the beginning of the year they put together the first annual Southcentral Kentucky Strongman competition to help stay focused and motivated through the offseason. Then they won it over Metcalfe County. A week later the KHSAA shut down scholastic sports in the commonwealth and football, along with everyone else was put on hiatus.

The team has been back together since mid-June, preparing in voluntary workouts until two weeks ago when they returned to the field for the first time together as a full team in nearly ten months.

The transition back has gone well for the boys and has been led by their 14-deep senior class.

Two of their leaders defensively are coming back from injuries which ended their junior years, safety Gary Crawford and linebacker Dawson Conn who missed nearly all of last season with a knee injury. “I’ve just been really proud of Dawson, he’s come back from the ACL bigger, faster, and stronger than he’s ever been,” Coach Isaac said. “He’ll be playing Mike linebacker and making a lot of our defensive calls for us as well as playing tight end.”

Also returning is Cameron “Truck” Harmon who ran for 500 yards and a pair of touchdowns last season taking most of the workload up the middle of the defenses, while playing a lot of strong defense from the outside linebacker spot. “He’s one of our best from last year and we expect to lean on him pretty heavily this first game.”

Filling out the linebacker spots will be Case Cowan, a junior who is the second-leading returning tackler behind senior safety Brady Cundiff.

Joining Cundiff and Crawford in the secondary are a pair of dangerous cornerbacks in senior Aaron Steele and DeShawn Singleton. Steele, who transferred to Adair in the middle of last year used his athleticism to make carve out a featured role on Adair’s basketball team this past winter. Singleton returned a pair of kicks for touchdowns last season for the Indians and had a pick-six in last year’s game against Metcalfe County.

Also returning is ProKicker.com four-star punter Chase Holmes. “Holmes is huge because he can flip the field at any given time if we need him to. He can put it anywhere on the field for us and that’s good for the team.”

Jake Smith was returns to anchor the offensive line at center for the Indians. He was voted team captain by his peers alongside fellow Brayden Burton who will anchor the defensive line with senior ends Dylan Pierce and Cameron Walker and stout sophomore Bert Soto.

“[Soto]’s a stud,” Coach Isaac said, “and if I could go back and do last year over, I would have liked to have worked a little bit more on offensive line. This year you’re going to see him pretty much stay on the field. He’ll be at right tackle and then he’ll also turn around and play a defensive tackle and he’ll be on a lot of special teams. The kid’s football-violent, he wants to hurt people on the field and in a good way between the whistles. He’ll be playing a lot.”

Under center this year will be quarterback Luke Janes. The 6’5” junior will step in for Aaron Peck who graduated this spring. “You know, of course anytime you have to replace a three-year starter at quarterback you get a little bit nervous,” Coach Isaac said. “But we had our we had an intrasquad scrimmage last Friday, and he really impressed with his ability.”

Flanking Janes in the backfield will be a fast combination of Steele, Cundiff, Crawford, and Case Cowan while Truck Harmon and Dylan Pierce will be ready to pound the ball right at the opposing defenses. “Case Cowan’s ready. He doesn’t have the speed that those others do, he’s a little bit younger but he is so hard-nosed, and I trust him with the ball in his hands. Dylan Pierce did not miss one workout and he’s ready to go and will be sharing touches with Truck at fullback.”

DeShawn Singleton will be out on the offensive perimeter working to create some big plays for the offense.

With a little more than a day until their first game of the 2020 season, the team will look to limit the inevitable miscues that come with such little team prep time while also handling the regular jitters of a season-opening game.

“Our kids are going to be nervous,” Coach Isaac said. “That’s just a fact and so we’ll probably start off pretty conservative offensively. We’ll probably be under center a lot at first and then after we kind of get those jitters out of the way, we’ll open things up. We have to trust in our preparation and the good job these kids and our staff have done.”

With the past two weeks spent installing their offense and defense it has taken every little effort to get ready for the season and every contribution from the team to the schools to the community.

“We’ve had two weeks to install all of our stuff and we’ve used this week to focus on staying healthy and being fresh while cleaning up any little mistakes,” Isaac said. “We’ve been making good use of that endzone camera and I want to say thanks to the board for getting that for us because it’s allowed us to see our little mistakes and clean them up. I’m confident with where we’re at. I’m just trying to get the Friday and play.”

The Adair Indians will kick off their 2020 campaign against Metcalfe County tomorrow night at 7:00 p.m. Masks and social distancing will be required of those in attendance.