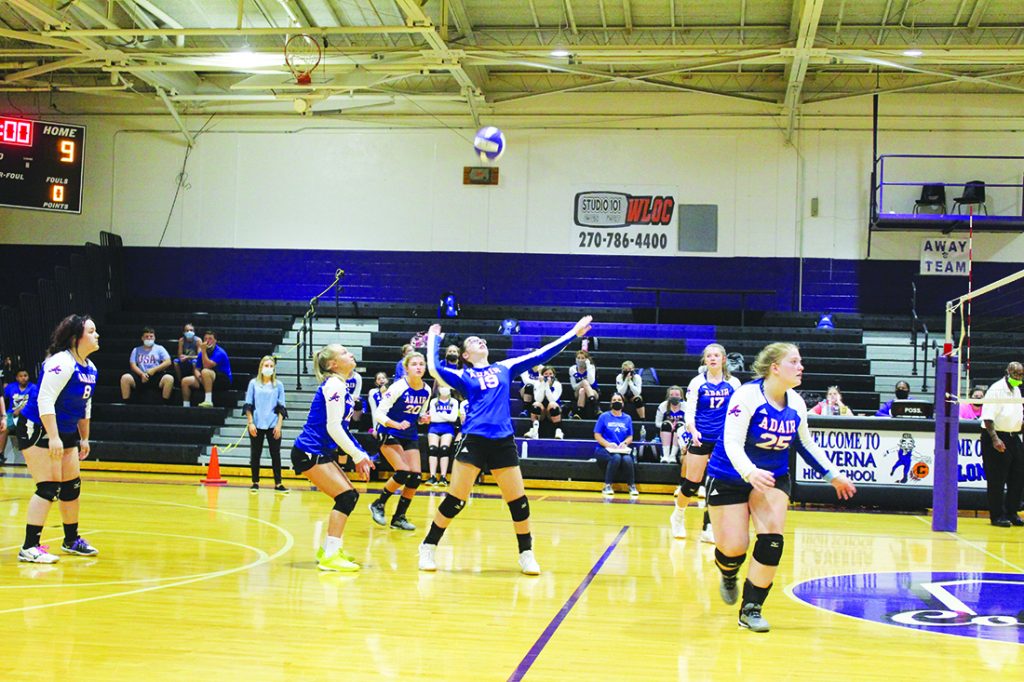 Contact sports returned to Adair County this week as the volleyball team kicked off their season with a two-set win over Caverna 25-10, 25-9. The Lady Indians started out hot with Rachel Long notching three of her team-leading eight aces on her first serve.

The Lady Indians built up a 6-0 lead before Caverna scored their first point of the match and played well throughout the evening for first-year head coach McKenzie McCollum who credits the team for the work they put in during their shortened offseason.

With limited time, the team has focused in on preparing for game situations to help their decision-making out on the court. “We really made sure they knew what they were doing for each instance,” McCollum said. “That really helped. They came into practice every day and worked hard and never gave up anything. I’m very pleased with their energy.”

The young team played a ten-deep rotation behind a core of Brown, Briley Burns, Eliza Spinks, Kiara Collins, McKenzie Long, and Gracelynn Akin and quality time from Faith Long, Ashton Flatt, Kyle Cowan and Elizabeth Bair who is playing up from 8th grade.

“I have a lot of young players and they’re all each very talented with something different that they’re really focused on,” McCollum said. “I just try to get six of them out there that really complement each other well and a lot of them that can do that.”

With early season rust more a factor this year than any other, the Lady Indians worked well to minimize their miscues and press their advantage when they had it. Throughout the first set, Caverna never got closer than 9-4, and when they did Adair went on a 9-2 run to put the set well out of reach.

With state health guidelines keeping the teams isolated to their own areas, there was no normal rotation between first and second sets. The crowd was broken into family groups and spaced apart with signs along the bleachers. Without the clusters fans were quieter than they had been in the past, as were the players.

“I think it’s just a sign of youth,” McCollum said. “I’ve told him I’m like you need to bring the energy. You need to be louder than the other team…. In practice they’re very loud. They’re very cheerful and they motivate their teammates. I’m hoping it’ll carry over more once the season gets going and they get more comfortable with the actual games.”

The second set likewise belonged to the Lady Indians from start to finish as they built out to a 14-5 lead on the way to a decisive 25-9 finish. Rachel Brown’s serving, which had led the ladies to their first six points, guided them on seven of their last eight as the game unraveled for the Lady Colonels.

“It feels really good to get the first time this season. It always starts off good when we do that and I just thank the Lord for my good serves and all the girls working hard today,” Brown said after the game. “We keep each other up, and we just had a really good time. Practice really helps but when we didn’t have enough practice it can be detrimental, but it’s not because we work well together.”

The Lady Indians travel to Marion County tonight and will remain on the road until September 21 when they host Taylor County.