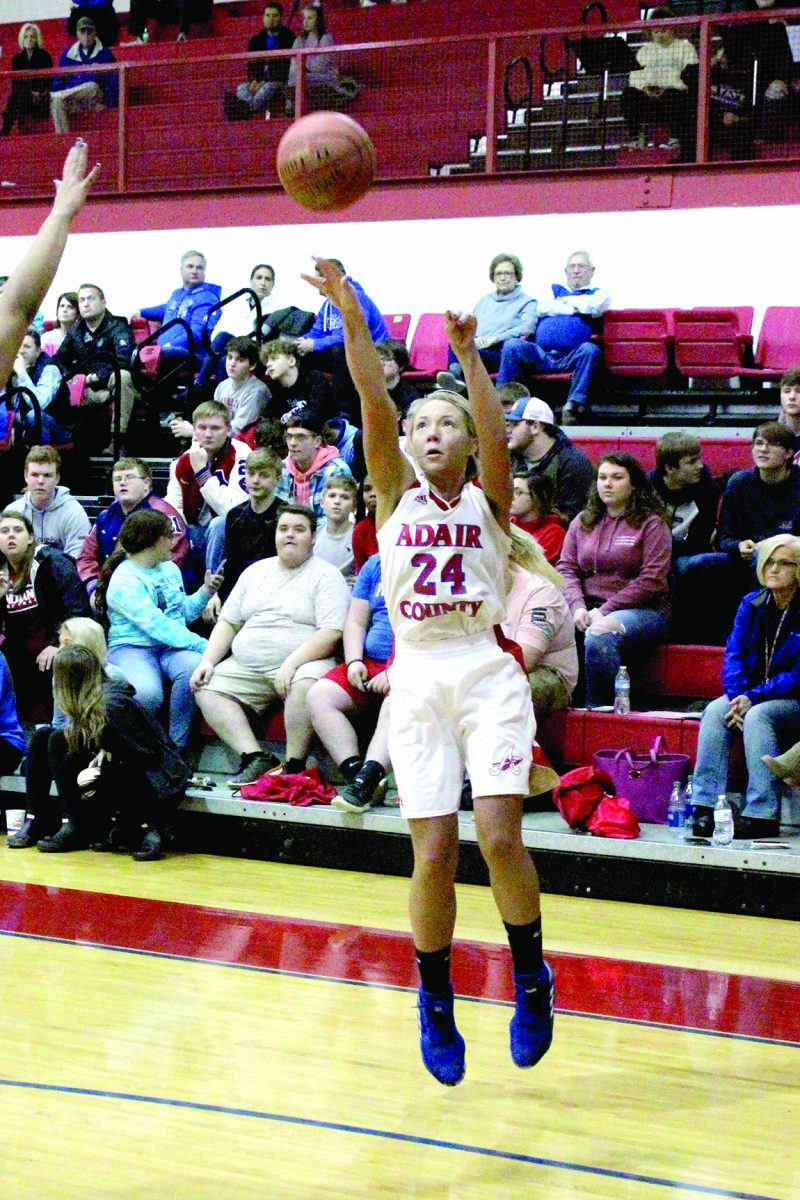 Lexi Feese’s three with two minutes to go in the second quarter gave the Lady Indians a one-point lead as they went up and down the court with the Lady Commanders. Seniors (pick one): The ACHS seniors gathered together for their final night together playing and cheering before their hometown faithful. Photo by Drew Bergman.

Adair County High School’s final home basketball games were, but for one exception, the absence of injured senior D.J. Brown, everything the sporting community could have wanted out of the night. In the first game of the evening The Lady Indians (3-24) battled Caverna (8-12) and overcame early second-half foul trouble to put the Lady Colonels away 40-34. In the final game, the Indians (13-16) got an early lead on the Colonels (5-21) and never looked back, countering every rally and run with aggressive drives and timely shooting to pull away 64-40.

Jadie Smith’s second basket of the night, a high jump shot from just inside the wing, tied the game at 5 with seven minutes remaining in the second quarter. Both the Lady Indians and the Lady Colonels played a smothering defense to open the game, but unlike on previous nights, the Lady Indians were able to battle and battle and finally break through for the win.

“It’s very big for these two seniors,” Coach Andrew Reliford said after the game. “They’ve put such an effort into this season, and they wanted more, but they have something they can remember for the rest of their lives. Both of them played extremely well.”

Jadie Smith was out in front all night with a 16 and 13 double-double that included the first nine points for the Lady Indians.

Offensive success leads, and Caverna’s Kaliana Richardson had done a lot of leading this season averaging 16 points a night. Lexi Feese held her to six points in the first 31 minutes of the game before she got to ten on late-game free-throws. “That’s so big to hold a girl that scores like that in check all night.”

Early on nothing was falling for Adair, even their reliable free throw shooting came up empty in the first quarter “We were struggling, but we kept at it,” Coach Reliford said.

Every basket in the second quarter resulted in either a tie or a lead change as both teams started to find their rhythm. Richardson’s first basket of the night gave the Lady Colonels a two-point lead with just over two minutes left in the half when Laney Stotts found Feese in the corner for a long three to get the lead back.

Richardson answered with just under a minute left and Jadie Smith responded with a three of her own with 23 seconds remaining to give the Lady Indians a 15-13 halftime lead.

“Both did an excellent job,” Reliford said. “I couldn’t be prouder of them.”

Coming out of the break the Lady Indians again cranked the heat defensively, but found themselves in foul trouble, committing six in the first two and a half minutes of the third. What could have resulted in a half dominated by Lady Colonel free throws settled into one dominated by Lady Indian defense.

“Our girls did a great job adjusting our defense, staying on top of them, but not giving them a pass.”

Feese and Kaylee Campbell especially wreaked havoc on Caverna and on the other end were able to find their teammates for open scoring opportunities leading to a 10-0 Lady Indian run.
The run started when Jadie Smith hit a three-pointer three minutes into the third. On their next possession, Carli Carter found range from outside with a three of her own. On the possession following that, Lexi Feese fought through for a tough make at the block and converted the and-1 for the good, old-fashioned three-point play. Jadie Smith capped the run hitting a free throw with just over two minutes left in the quarter.

With the seniors securing the night in the third, the fourth quarter had the feel of passing on the torch as the seniors set up their teammates. The underclassmen finished out the night’s scoring while the seniors left the floor to a standing ovation from the crowd.

Ellie Cheatham, Annamarie Day, and Kaylee Campbell took over in the fourth, scoring six, four, and three points in the final quarter, with Campbell connecting on three of four late free throws to ice the game.

Jadie Smith’s final home game produced the 16 and 13 double-double. Lexi Feese scored six with three boards, two assists, and a steel, though her biggest contribution was locking down Caverna’s Richardson. “It’s not as glamorous,” Reliford said, “but she did exactly what we needed to win.”

Cheatham had seven points and eight rebounds on the night, Carter had four and five, and Day finished with four and three. Campbell had three points, rebounds, and steals 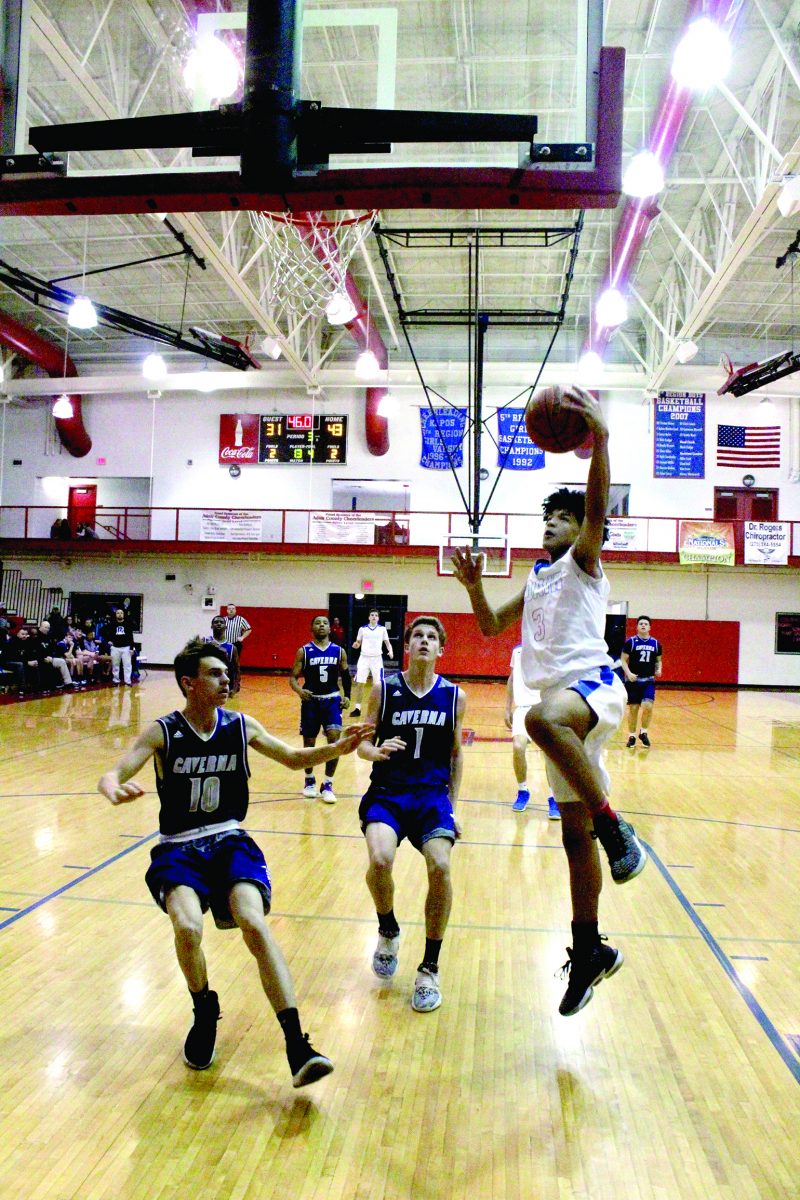 Kai Burton led the Indians with 19 points, 7 rebounds, 3 assists, and 5 steals in his final game at John Burr Gymnasium. Photo by Drew Bergman.

for the Lady Indians. They return to the court Friday night at H

art County before the travel to Taylor County for their District 20 Tournament match against Marion County this Tuesday at 6:30 p.m.

The Adair Indians were sore and sorely in need of a bounce-back game after back-to-back losses against Russell County and Washington County. The team had missed and still misses the floor presence of senior D.J. Brown, but last night they found a way to win behind fellow senior Kai Burton’s 19-point effort.

“We did a good job bouncing back,” Coach Deron Breeze said. “I think the biggest difference between last night [against Washington County] and tonight is that we’re the kind of team that needs to play with the lead. If we can get to ten before the other team we’re in for a good night.”
It wasn’t only that they got to ten points first, but how they did.

With Caverna coming out in man defense each of the first five Adair shots was hit by a different player showcasing their specific skillset. For Lucas Pooler and Kai Burton it was a pair of drives left and right, for Luke Janes it was surefooted work on the block, for Connor Loy it was a corner three, and for Aaron Steele it was a slash on the right.

“I was a bit surprised they came out in man,” Coach Breeze said. “

They had been playing a lot of 2-3 tandem a lot. We took advantage of that in the first half. It all starts with Lucas, if he’s driving and attacking it forces the defense to collapse which gives Kai and Steel room to and that in turn gives the Brice and Connor space to shoot.”

Brice Starks became the sixth Indian to score when he hit a silky three from the left wing to start the second quarter on his way to an 8 point, four rebound night.

“We still got outrebounded,” Coach Breeze said. “Without D.J. we miss a lot of boards in there.” Also limiting Adair down low was the health of forward Luke Janes who has been suffering flu-like symptoms. His health limited him to five points and three boards in under sixteen minutes of game time.

With D.J. out and Luke limited the Indians played a lot of small ball. “We started the second half with a five-guard lineup and with [Caverna’s big man Jaxton] Dunagan staying in the middle of the floor that got Brice room for that big three.”
Starks’ three put the Indians up 33-24 at the start of the third and he and Steele got underneath the Caverna defense to push that lead to 13 with six minutes to go in the quarter. Caverna cut the lead to eight over the next four minutes of game time with a gritty performance. “They hit a lot of tough shots,” Breeze said. “Our defense played really well.”

That was when the defense went from playing really well to taking over. Starks and Burton had been harrying the Colonels throughout the night, but with two minutes to go in the third Burton flipped a switch.

He put on a clinic defensively, swatting, poking and disrupting passes that and he, Pooler, and Steele turned into layups and free throws.

“Our transition offense was much better tonight. We talked about needing to outlet the ball and driving down the court, we watched film on that and were able to execute.”

The three combined to score the final 25 points of the night for Adair as they ran mercilessly at the basket for the next ten minutes. Even as Caverna hit threes on three consecutive possessions midway through the fourth Adair had an answer each time allowing them to pull away for the final 14-point margin.
Kai Burton left the court with 25 seconds left as Coach Breeze cleared his bench. The student section cheered for the seniors in that final minute, first for Kai, then the injured D.J. Brown who smiled up from them on the bench.

Burton led the Indians with 19 points, seven boards, three assists, and five steals. Joining him in double-figures were Lucas Pooler and Aaron Steele. Pooler went 17, five, and five, and Steele went 12, 2, and 2. Brice Starks had 8 points on three shots and added four rebounds. Luke Janes scored five and rebounded three in limited action, and Connor Loy rounded out the scoring with a three. He also collected two rebounds.

Next up for the boys is a trip to Hart County on the back end of a girl-boy double-header tomorrow night, then they will have five days until their third matchup against Campbellsville this season in the District 20 Tournament hosted by Taylor County. Tipoff for that game is scheduled for 7:00 p.m.