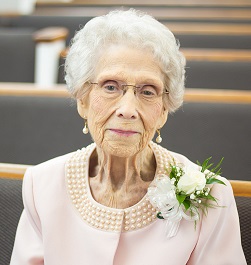 Argerine Sneed Kemp, 87, of Campbellsville, daughter of the late William “Bud” Sneed and Alice Baker Sneed, was born October 29, 1931, in the Gradyville Community of Adair County.

She professed faith in Christ and was a member of Lowell Avenue Baptist Church.

During Argerine’s short time at Grandview Nursing Home, she was voted President of Residents Council.  In her spare time, she loved reading the Bible, going to church, and spending time with her grandchildren and great-grandchildren.

Burial was in the Campbellsville Memorial Gardens .

Expressions of sympathy are requested to be donated to Lowell Avenue Baptist Church, and may be made at Parrott & Ramsey Funeral Home.