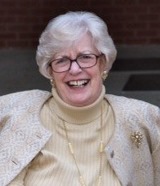 She was born January 28, 1940, in Russell County, to the late John and Josephine Carnes Marcum. In addition to her parents, she was preceded in death by her husband, James F. “Jimmy” Harper on October 28, 2011. She was a member of Columbia Christian Church and a homemaker.

Burial was in Columbia Cemetery.

In lieu of flowers, the family would appreciate a donation to the Columbia Christian Church, which can be left at the funeral home.