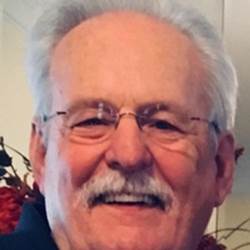 Mr. James Ralph Petty, 74, of Shepherdsville received his wings on Friday, August 17, 2018 after several months of illness at Norton’s Audubon Hospital. James was the son of the late Ralph and Annie Mae (Coomer) Petty. He retired from Brown and Williamson and Philip Morris. He was a member of Old Shively Methodist Church and attended Overdale Methodist Church for the past 10 years. Mr. Petty was Master Mason of Hudsonville Lodge #262 from 1979-1980. He loved his church family and was a big Nascar fan.

Funeral service was conducted at 7 pm on Monday, August 20, 2018 in the chapel of Schoppenhorst, Underwood and Brooks Funeral Home (Preston Highway at Brooks Road). Friends could pay their respects on Monday from 3-8 pm at the funeral home.

On Tuesday, August 21, 2018 a funeral service was held at 1 pm CST at Stotts-Phelps McQueary Funeral Home (210 Greensburg Street Columbia, KY 42728) with interment in Haven Hill Cemetery in Columbia. Friends could pay their respects from 10 am CST until time of service at the funeral home.

Expressions of sympathy may be made to Wounded Warriors and/or Gideons International. www.subfuneralhome.com

Stotts-Phelps-McQueary Funeral Home was in charge of the arrangements.