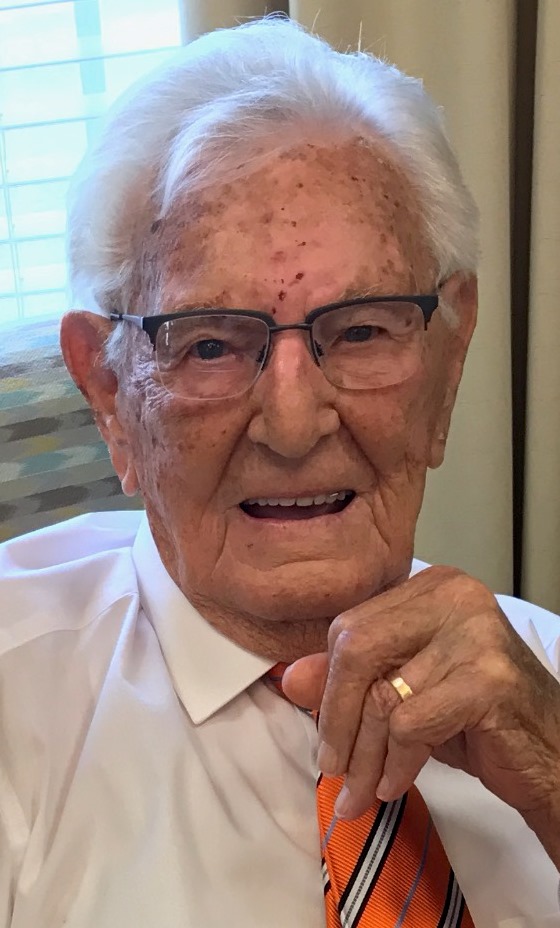 Rollin K. Pyles, 101, formerly of Columbia, died Sunday, August 5, 2018, at the Campbellsville Retirement Home. He was born July 7, 1917, in the Ella community of Adair County, to the late J.B. and Retta Mae Bryant Pyles. In addition to his parents, he was preceded in death by his wife; Pina Lee Rich Pyles on August 21, 2009, three children; Mark W. Pyles, Dallas Keith Pyles and Sharon Pyles and nine brothers and five sisters.

Mr. Pyles was a member of Trinity United Methodist Church, serving as finance chairman for 25 years and chairman of the building committee at the time the church built the current million-dollar facility, served as President of the Chamber of Commerce for two terms, served on the City Council for six terms, on the Board of Trustees of Lindsey Wilson College for 12 years, a member of the Airport Board for 25 years, very active in the Republican Party and always believed in giving back to the community and that you could never out give God.

Survivors include two sons and daughters-in-law, Jerry D. and Carmen Pyles of Columbia, Harry C. and Paula Pyles of Louisville; one daughter and son-in-law, Sheila P. and Larry Russell Bryant of Columbia; nine grandchildren and 16 great-grandchildren; special friend, Doug Hogan of Campbellsville, and host of nieces, nephews, other relatives and friends.

In lieu of flowers, the family would appreciate a donation to Hosparus of Green River, Trinity United Methodist Church or Gideon Bibles. These may be made at the funeral home.