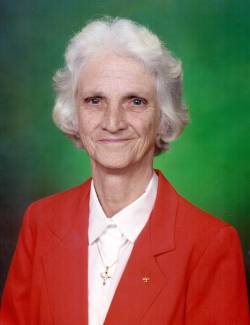 Eula Loy, 82, of Columbia, KY passed away Saturday, August 4, 2018, at 1:00 PM at the Green Hill Rehabilitation Care Center in Greensburg, KY. She was born on Oct. 18, 1935, in Adair County. She was the daughter of the late Chester and Elsie Burton Lawhorn of Adair County.

She is survived by two sisters, Bertha Marr of Campbellsville, and Evelyn Bunch of Glensfork; two brothers, Ray (Brenda) Lawhorn, and Raymond (Vernice) Lawhorn; and a sister-in-law, Bonnie Lawhorn all from Columbia. Several nieces, nephews, a host of other relatives and friends survive.

She was a member of Pierce Chapel Baptist Church, a housewife and loved working outside. Funeral services were held Wednesday, Aug. 8, 2018, at 1:00 PM at Stotts-Phelps-McQueary Funeral Home. Clergy officiating was Bro. Stanley Watson and Bro. Jessie Hagan. Interment followed in the Loy Cemetery at Fairplay. Stotts-Phelps-McQueary Funeral Home was in charge of the funeral arrangements. Visitation took place after 4:30 PM Tuesday.