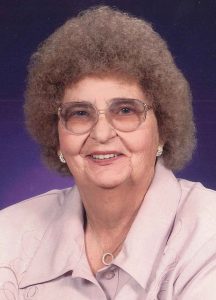 She was born April 22, 1932, in Adair County, to the late Ray and Myrtie Karnes Curry.  In addition to her parents, she was preceded in death by her husband, Condy Blankenship, in 1993, one son, Ricky Blankenship, in 2017, and two sisters, June Preston Curry and Carolyn Ann Curry.  She was a member of Columbia Baptist Church and a homemaker.