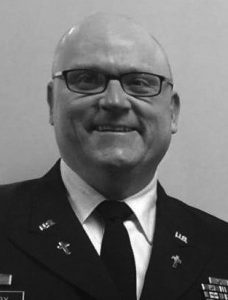 He is survived by his wife of 27 years, Melissa, and their three sons Jacob, Noah, and Benjamin; his parents, Benjamin and Imogene Curry; his father and mother-in-law, Jerry and Marion Weber; and many other family and friends who will forever miss him.

Brian was preceded in death by his two brothers, Greg Curry and Gerald Curry.

Brian faithfully and honorably served his Lord and his country as a Chaplain in the United States Army.  As a Chaplain, he ministered to soldiers and their families while stationed at Rock Island Arsenal, IL; Fort

Brian earned his Master’s of Divinity at The Southern Baptist Theological Seminary in Louisville, KY and his Bachelor’s of Communications at the University of Louisville. He was a graduate of Bullitt Central High School.  Brian was a man who was loved and cherished by many. His presence will be forever missed by all who were fortunate and blessed to know him.

Funeral service will be conducted at 11:00 am on Friday, June 1, 2018, at Cedar Grove Baptist Church, 4900 Cedar Grove Rd. Shepherdsville, Ky. with burial in Cedar Grove Cemetery to follow.  Friends may pay their respects from 1:00 pm to 8:00 pm on Thursday at Schoppenhorst, Underwood, and Brooks Funeral Home (Preston Highway at Brooks Road) and from 10:00 am until the time of the service on Friday at the church.

Expressions of sympathy can be made to the Crohn’s and Colitis Foundation of America (CCFA).

This obituary information is a courtesy of Grissom-Martin Funeral Home in Columbia.