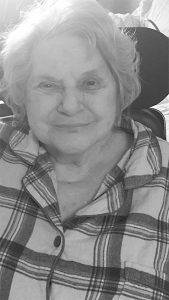 Doris Montgomery, 88, of Columbia, Kentucky, died peacefully at home surrounded by her family and caregivers on Friday, May 18, 2018.

She was born September 7, 1929, in Green County, to the late Bayard and Mary Blaydes Antle. In addition to her parents, she was preceded in death by her husband of 50 years, J.C. Montgomery in 1999. She was a member of Columbia Baptist Church and a homemaker.

She will live forever in all of us and we will forever feel her love.