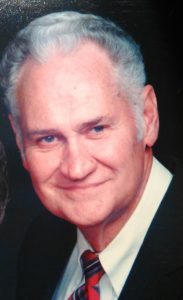 He was born February 18, 1926 in the Little Cake community of Adair County to the late Robert Bruce and Lela Beard White.  In addition to his parents, he was preceded in death by his wife of 61 years, Daisy Sandusky White, and one sister, Amelia Wesley.

Bob served his country during WWII in the United States Navy from May 1944 to June 1946.  After returning from service, he worked at Henry Sandusky’s Lumber Mill and the Bank of Columbia.  In 1961, he was elected as Adair County Court Clerk where he served until 1985.

In lieu of flowers, contributions may be made to the Columbia Christian Church or Hosparus of Green River.  These may be left at the funeral home.