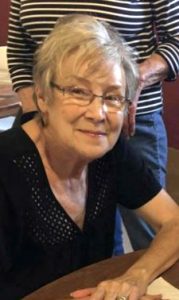 She was preceded in death by her husband Billy C. Sneed on Jan. 31, 2012; one brother Pete Richard and four sisters Maggie Sneed, Bernice Taylor, Artie Lee Aaron and Margaret Davis.

She is survived by one son Tony Sneed & his special friend Melissa Moore of Columbia; one granddaughter, Natalie (Joe) Marcum, one brother, L.T. (Gay) Richard, one sister, Lucy Long all of Columbia, KY and special friends Mike, Sherry, and Benisha Parnell. Several nieces, nephews, other relatives and friends also survive.

She was a member of Fairdale United Baptist Church on Fern Valley Road in Louisville, KY. She had retired from Fruit of the Loom in Campbellsville after 30 plus years and was a homemaker.

Funeral services were held Friday, May 4, 2018, at 11:00 AM at Stotts-Phelps-McQueary Funeral Home. The clergy officiating was Bro. Bobby Withers. Interment took place in Haven Hill Cemetery.