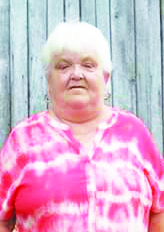 Linda was a homemaker.

In addition to her parents, Linda was preceded in death by her husband, Alfie Compton; daughter, Renee Weddle; and two grandsons, Travis Popplewell and J.R. Chumbley.

Funeral service for Linda Sue Compton was on Sunday, Jan. 7, 2018, at 1 p.m. at the Bernard Funeral Home Chapel with Bro. Terry Shelley officiating.

Interment was in the Grider Cemetery.

Bernard Funeral Home in Russell Springs in charge of arrangements.