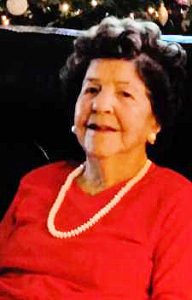 We celebrate the life of Frances Carlton not only for her indomitable spirit of adventure and a life well lived.

Frances saw and lived most of the twentieth century that reached across the miles from her beloved Ky. After graduating from Columbia High School she attended business college in Louisville, where she met and married Hal H. Carlton in 1935. They traveled and lived across the country. During World War II while Hal was safety engineer for Remington Arms she did her part in the war effort in the bookkeeping and supply coordinator at the same location in Kansas City, Mo. She was a member of the Rosie the Riveter Club.

After the war, they moved to Arkansas from there to South Texas and finally back to Atlanta, Ga. where they remained.

Frances love for adventure continued after the death of her husband with trips around the globe. During the 1996 Olympics at the age of 82 she worked as a volunteer observer and in her 90’s she was taken on whitewater rafting trips through the Blue Ridge Mountains.

After a 49 year marriage and the death of her husband she started working outside the home and retired from the Trust Department of Bank of America. Mrs. Carlton was a life-long member of the Christian Church, she was baptized at the Shiloh Christian Church in Adair County and attended the Peachtree Christian Church of 66 years.

Burial in the Columbia Cemetery

The family will receive friends after 10:00 a.m. on Saturday, January 6, 2018 at Stotts-Phelps-McQueary Funeral Home.