On Valentine’s Day Jared Peck of the Lexington Herald-Leader announced Kentucky.com’s Girls Player of the Week for the first week of February. The name at the top of that list was Adair County’s own freshman forward Ellie Cheatham.

“I’m thankful for all the support from everybody, the whole county, really,” Ellie said. She credits her teammates, especially, for being supportive and being good teammates. “It’s really rewarding.”
As an eighth grader, Ellie was the team’s leading rebounder and second-leading scorer averaging 5.9 points and 7.5 rebounds per game. This year as a freshman and full-time starter, Ellie is close to averaging a double-double through the team’s first 12 games with 9.8 points per game and 10.8 rebounds. Including a pair of free throws and rebounds from her seventh grade year, Ellie already has 292 points and 350 rebounds for the ACHS Lady Indians.

“We’re proud of her hard work and her continued work with the team,” said Tiffany Cheatham, Ellie’s mom.

“As a good of a player as she is, Ellie is even a better person,” said Lady Indians head coach Andrew Reliford. “She was elected as Miss Freshman by her peers and is a superb representative for our program. She is a gem to coach and a terrific teammate.

“Ellie’s heart and determination makes up for any lack in size and strength she may have against bigger opponents. Before her career is over at Adair County, I believe she will be remembered with other great players who came through the program. This is a well-deserved honor.”
Between COVID-19 and the winter storms, the Lady Indians have not played a game since they were in Caverna on Feb. 9. Their next scheduled game is at 5:30 tonight against Clinton County, but with another line of winter storms coming through overnight, the status of that game is certain.

What is certain is that Ellie Cheatham is already a difference maker on the court for her team and now the whole state knows it. 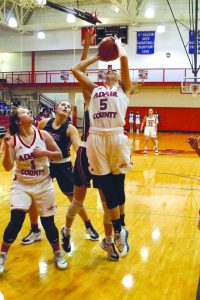