Back in October the local chapter of the Templar Knights Motorcycle Club held their first annual Toys for Tots Motorcycle Run to raise money for the organization in support of local kids. On Saturday three riders, local chapter president Sean Hatcher along with Jed Wasson, and Johnny McInteer, rode to Adair County Elementary School hauling a trailer and truck bed filled with Christmas gifts for Adair’s children in need.

“It’s always awesome to help out kids,” Wasson said. “Especially in this time when so many parents are struggling and off work with the coronavirus and workplaces getting shut down. A lot of kids might not get something this year with that, so hopefully this helps them out.” 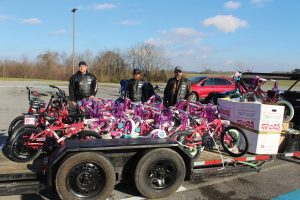 Jed Wasson, Johnny McInteer, and chapter president Sean Hatcher with the Templars Motorcycle Club delivered a trailer and truck bed filled with bicycles, books and other gifts to Adair County Elementary School this past Saturday.

The Brandon who reached out to Cowan and the Family Resource center was Brandon Branham, vice president of the local chapter of the Templars Motorcycle Club.

Sean Hatcher said that the Templars are hoping to make their ride an annual tradition for the club. “It’s good for the community and especially for the kids, who are now able to get something where otherwise they wouldn’t.”

The ride itself came after a three-day run of unseasonably beautiful October weather which saw sunshine and temperatures in the mid-70s.

The day of the ride itself the weather was wet and dreary with temperatures in the mid-50s. “We only had 15 or 16 show up, but were able to raise a couple thousand dollars, plus some toys,” Hatcher said. “It was a good day all-in-all, even with it being a cold ride.”

“We went on another Toys for Tots ride with a brother chapter in Bowling Green and that’s what gave us the idea,” Hatcher said. “If you have a local ride, everything in the area that’s donated stays local as opposed to getting spread out.”

Following the Templar’s October ride, they worked through the United States Marine Corps’ Toys for Tots program to get the toys and then brought them to ACES. 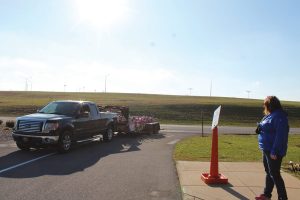 ACES Family Resource Center Director Debbie Cowan was on hand to receive the shipment of Christmas gifts delivered by the Templars.

The families receiving the gifts have already gone through and been approved by the application process and the gifts will be distributed in time for Christmas. “We have about 400 kids that we’re helping this year,” Cowan said.

“This is great for the community,” Johnny McInteer said. “I like the fact that what we raise goes for our county, there’s a lot of kids right that need help.”

“We’re thrilled at the support from our local community each year,” Cowan said. “And this year we’ve had many new folks reach out, such as Toys for Tots organization, and Brandon and his crew with the motorcycle run. Thanks to them Christmas is going to be extra special this year for a lot of Adair County kids.”