The ACHS Indians rolled into Taylor County Friday night looking for a game. Then they did the same thing Saturday afternoon. It wasn’t COVID-19 that delayed the matchup, it was persistent cloud-to-cloud lightning which, having already delayed the contest an hour, soon gave way to a torrent of rain. 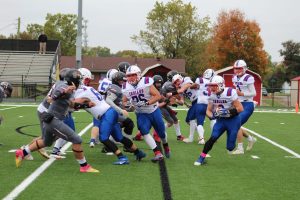 Bert Soto (76) pulling for Dylan Pierce (3) in the third quarter of Saturday’s game. Pierce led the Indians with 118 yards and a touchdown on the ground.

Despite the delay, or maybe because of it, both teams came to the field Saturday ready to hit. Brady Cundiff started the game at quarterback for Adair, providing a different look for the offense, which was slow to get going. Across the field, the Cardinals were doing no better as Adair held them to three-and-outs on their first three drives.
“We played probably our best first quarter all year,” Coach Isaac said after the game.
Key to the early success of the Adair defense was keeping Taylor’s all-time leading rusher Wes Oliver in check, which they did holding him to -5 yards on five carries in the first quarter.
Following the second three-and-out which saw Taylor punting from their own 12, Adair took possession on the Cardinal 29 and almost immediately took advantage. A 2-yard run became a 15-yard gain as a horse collar call moved the ball to the 14. Dylan Pierce took the ball another 11 yards right through the middle of the Cardinal defense.
The teams exchanged some words following the run, resulting in offsetting unsportsmanlike conduct penalties. Two plays later Pierce again battered the ball inside, this time for a score. Chase Holmes’ PAT kick gave the Indians a 7-0 lead through the end of the first quarter.
The teams traded three-and-outs as Adair kept Oliver bottled and an attempted hard count backfired turning a manageable third and six into a long third and eleven.
A sack of Luke Janes set the Indians back to their own 36 facing fourth and 18. Chase Holmes came out to punt. The ball bounced at the Taylor 24 and kept bouncing all the way to the 4-yard line where Carson Watson decided to field it rather than let Brady Cundiff, who was flying down the field from the gunner spot, down it any closer to the goal line.
Cundiff flung Watson backwards and during the tackle went numb, having landed poorly on his arm. He was down on the field while trainer Rebecca Cravens examined him. Eventually, Brady sat up and walked off under his own strength, but he was done for the day. 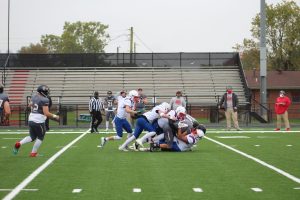 “When Brady went down it was just a huge momentum swing for our kids,” Coach Isaac said, “you’ve got to remember they’re still young and he’s our MVP from last year, and we were using him at free safety and quarterback, so when he went down, your whole gameplan changes. We had to rely on a lot of young kids and all-in-all I’m still really happy with our young kids. Yes, we got beat deep a few times, but coming into this game our goal was not to let Wes Oliver beat us and we did achieve that.”
Without Cundiff on the field, the Cardinals picked up their first first down with just under eleven minutes to go in the second quarter, and they didn’t stop there. Ethan Coghill found Conner Roney on back-to-back pass plays of 36 and 15 yards, taking advantage of Adair’s attention to the run. On the Cardinal’s third consecutive completion, a 6-yard completion to Carson Watson, Adair got flagged for a horse collar tackle, pushing the ball to the Indians’ 27.
Adair looked to hold there, forcing a third and five with 9:22 in the quarter when they took the timeout. However, Taylor came out of the break with a 22-yard touchdown pass from Coghill to Roney. The Cardinals then dropped a floater off a fake quarterback draw into Joey Holloway for the 2-point conversion.
Dylan Pierce responded to the touchdown with a 17-yard run to start the next drive, getting the ball close to midfield. Truck Harmon got the ball to the 50 on second down, but a toss play on third went for no gain and Luke Janes’ fourth-down pass to Aaron Steele sailed high.
On the next play the Indians finally lost containment on Wes Oliver, who picked up nearly half his running yards for the day on a 50-yard counter.
The Indians fought their way to the 50 again on the next drive, but the drive stalled and Taylor took over at their own 15.      The defense again held Oliver in check, but Coghill was able to break out and scramble for 23 yards off a play action pass. Coghill found Dalvain Thorton over the middle for an 18-yard pass and Watson for an eight-yarder to give the Cardinals the ball at the 47 with half a minute left in the half.
Coming out of the timeout, Coghill tried to take a shot deep where Connor Roney was matched one-on-one with Aaron Steele. Roney and Steel both went up for the ball at the eight-yard-line, but where Roney jumped higher, Steele had better position on the pass and killed the Cardinal drive at the 2-yard line. 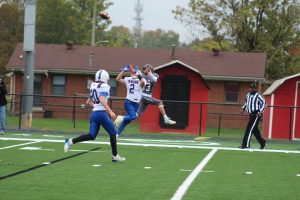 Aaron Steele’s second quarter interception of Ethan Coghill with 18.9 seconds in the half kept the Indians within a touchdown at the half.

“We made some good plays today, we made some spectacular plays today,” Coach Isaac said. “The bottom line is we went against a top-12 team in 3A and hung right in there with them through over half the game.”
The teams traded touchdowns to open the third quarter with Wes Oliver scoring from a yard out capping a five-play, 44-yard drive that began as a result of an onside kick attempt from the Indians.
Gary Crawford got the next Indians drive off to a fast start, scooting for 52 yards on the next play and setting the team up with first down at the Taylor 18. Three plays later Harmon tore his way through the Cardinal defense to bring the Indians back to within 10, 23-13.
Coghill was able to lead the next scoring drive for the Cardinals, throwing for 56 yards and running for the last 5 to extend the lead to 30-13, where it stayed until the end of the third quarter.
Adair found themselves forced to punt from their own 13 three plays into the fourth quarter and Carson Watson was able to return the punt from midfield down to the Indians’ 36. Coghill again hit Roney, this time for a 19-yard pickup, which set up the only other time Wes Oliver got away from the Indians defense, this time on a 17-yard run.
Playing for pride, the Indians moved the ball down to the Cardinal 38-yard line before Taylor forced stopped a fourth-and-four attempt. Adair answered by shutting down Taylor on fourth and 17.
With 3:56 left, down 37-13, the Indians marched.
Down Brady Cundiff and with Luke Janes nursing injured ribs, they had to keep the ball to the ground. The drive almost stopped where it started with a fumbled snap, but Truck Harmon was able to pick up the ball and fight forward for two. He picked up another four on the next play and five the play after, all going right at the Cardinal defense.
Aaron Steele converted a third and six with a 17-yard run and Dylan Pierce almost matched him with 16 yards on the following play. Pierce scored with 19 seconds remaining, and though the 2-point conversion attempt failed, the 37-19 margin was the closest any district team has gotten to the Cardinals this season.
Tomorrow night they hit the road for what should have been a home game against Casey County. Adair can still host a first-round playoff game this year if they can win that game and the season finale at Glasgow.
If they show up for these next two games the way they showed up against Taylor, they might just do that and more.
It’s an assessment of the situation Coach Isaac agrees with. “I want to see them again,” he said. “Hopefully we finish out beating Casey and Glasgow, get homefield advantage… and get Taylor County again in the second round matchup.”
Dylan Pierce led the Indians with 118 yards on the ground. Truck Harmon finished with 53 yards on 17 carries and the touchdown and Gary Crawford carried three times for 57 yards. Battling injured ribs, Luke Janes was only able to complete one pass, a 13-yard screen to Harmon on three attempts.
Case Cowan led the Indians with nine tackles, including two for a loss. Linebacker Dawson Conn had eight stops. Freshman Lane Grant, filling in at safety for the injured Brady Cundiff, had seven tackles and his first interception in varsity play.
“I’m really happy with our guys,” Coach Isaac said.