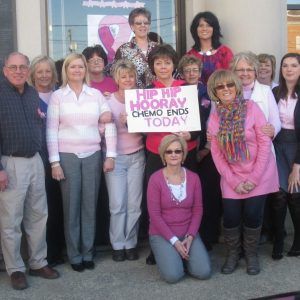 On her last day of chemo Debbie’s friends at work gathered to celebrate. “When I was diagnosed on a Friday, I called Mark Dykes, my boss, and told him,” Debbie said. That Monday, Mark organized a meeting for everyone to come together for the news and since then he and the Bank of Columbia have stood behind Debbie.

It’s been nearly seven years since Debbie Selby was first diagnosed with breast cancer and barely three months since her latest battle.

“I attribute it all to God helping me and having my friends there in support,” she said. “God’s the one that has to see you through it and the main strength you will have will come from God and from your faith.”

October is Breast Cancer Awareness Month, the time of year we set aside to raise money and awareness around breast cancer, a malady that affects around 12 percent of women, with over 300,000 new cases expected to be diagnosed by the end of the year, including Debbie’s second bout.

“I tell the ladies to make sure they get their mammograms done every year,” she said. It was a routine mammogram that detected her second cancer this past May.

Her doctor performed three biopsies on the suspect tissue. The first two doctors knew would come back fine, “‘But,’ my doctor said, ‘I have one more spot that I have to check,’ and that third one was where she found the cancer.”

The mammogram detected Debbie’s cancer at stage zero, the initial formation of the first cancer cells. Her cancer was detected so early this time that she did not require chemotherapy as part of her treatment, only a lumpectomy and 38 rounds of radiation therapy.

Even with the cancer removed in its earliest stages the radiation therapy was still necessary because, as Debbie’s doctors told her “One cell is all it takes.”

Debbie’s radiation therapy ran for seven and a half weeks, going Monday through Friday for the first six. This year took extra effort with the restrictions particularly around medical treatment due to the novel coronavirus.

Apart from temperature checks and health screening questionnaires, Debbie and the other cancer patients had to spend the summer months waiting in their cars waiting their turn. “They only wanted one patient in there at a time. Of course, a lot of the ladies and gentlemen who had been through radiation were also going through chemo, which damages their immune systems,” Debbie said.

To help safeguard the patients, medical staff deep cleaned and sanitized the patient areas between each person.

Radiation treatments require patients to lay on a medical bed where they are positioned using laser-guided measurements to ensure that the radiation bursts are only going directly to the targeted area. Patients have to lay in exactly the same position each and every time they visit and the treatment leaves a mark similar to a sunburn on the affected area.

“This time they really went stronger,” Debbie said. “Especially with it being my second time through, and not doing chemotherapy. They wanted it to be stronger, so there was some blistering, but one of the main side effects is that it makes you so tired.”

Debbie said that the last two weeks of her radiation were the toughest, and with her now two weeks out from her final treatment she is starting to feel more like herself again. 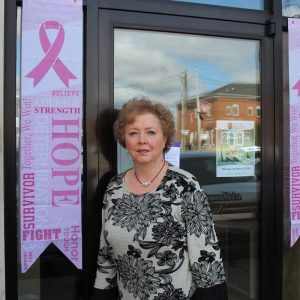 Debbie today outside of the Bank of Columbia, where she remains an employee to this day. “I could not ask for any better support group,” Debbie said. “Mark and the board were always there for me.” The bank allowed Debbie to work around her treatments and stay safe when those treatments compromised her immune system.

“Radiation is rough, but chemo is terrible,” Debbie said from first-hand experience.

The surgeon who performed her lumpectomy told Debbie that this second cancer, while still breast cancer, was a different challenge than the one she had faced before. This one required her to take a genetic test to see if the cancer was the result of a trait that was hardwired into her DNA, and something that could be passed down along the generations.

“If it’s in your genes, they want you to have a mastectomy and if you have a daughter or a granddaughter, they would have to be tested for it,” Debbie said. “But my genetics came back negative, which was great.”

Back in 2013, doctors had told Debbie that they believed that cancer was the result of genetics, but there had been no history in living memory of anybody in her family having dealt with breast cancer.

“This is why I stress to all the ladies about having their mammogram every year. There is so much we don’t know about cancer and just because you have no family history is no guarantee that you won’t have it. Had we not found it in 2013 when we did, by the next year that cancer would have been so far advanced and so out of control that it would have been so much harder to fight back against.” 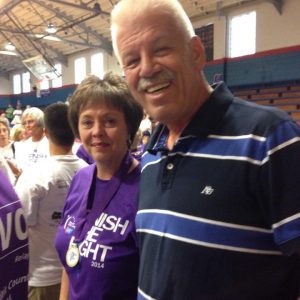 Debbie and her husband, Dennis. “I never had to go to a chemo treatment alone. My husband promised me he would always be by my side, and he was.”

During the course of her chemotherapy, on Christmas Eve of 2013, Debbie had to get a wig. “My husband and I pulled up at the mall, and I told Dennis he would have to give me a few minutes. I knew everybody was in there shopping and having a big time ahead of Christmas and I was getting my wig because I was going to lose my hair this week,” Debbie said. “I had to sit there to get my composure.” Debbie reminded herself of what she did have in faith and family and found the strength to face the teeming masses of people celebrating while she was in the midst of her greatest struggle.

“You’ve got to fight for that, and have your mind trained to be positive. There are days where it is so bad you have to lean on a wall just to make it down the hall,” Debbie said. “With chemo it takes two weeks to get back to feeling somewhat normal, but by the time you get built back up you have to go again. It’s a constant thing of keeping your mind positive.”

Through both of her battles, Debbie had her faith and her families at home at church and at work ready to lift her up. 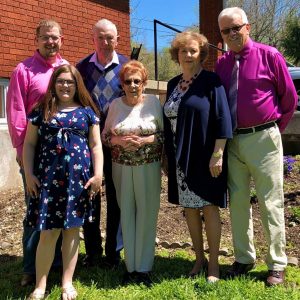 Debbie attends Living by Faith Church where Bobby Withers is pastor. “It was awesome how my church would pray and anoint prayer cloths. That is such a benefit to know that you have people behind you,” she said. “You can feel their prayers. You can feel when people are praying for you.”

“As soon as you hear ‘cancer’ you think of dying because so many people die from cancer, but I always had a good attitude, and I attribute a lot of that attitude first of all to God. Second of all, to those who were my support group, my family and the people that I work with at the bank,” Debbie said.

“Your attitude is the majority of your healing. When you go to a cancer center–and I went to Campbellsville–the first thing they’ll tell you is if you have a positive attitude your body will respond accordingly. If you have a negative attitude, your body responds accordingly, and you don’t heal as good.”

The first time Debbie was diagnosed she was taken aback. But she prayed and read the scriptures and realized that God would take care of her. No matter what happened, God would be there.

“Bad things happen to good people, and you can’t question that and wonder what you could have done to deserve it,” Debbie said. Cancer is not about deserving, it is about how you choose to face it.

“This last time there was no lump or any other indication that I had it,” Debbie said. When they told her the news, her reaction was “If it’s there, let’s get on with it, let’s get it out and we’ll do whatever we have to so we can get it out.”