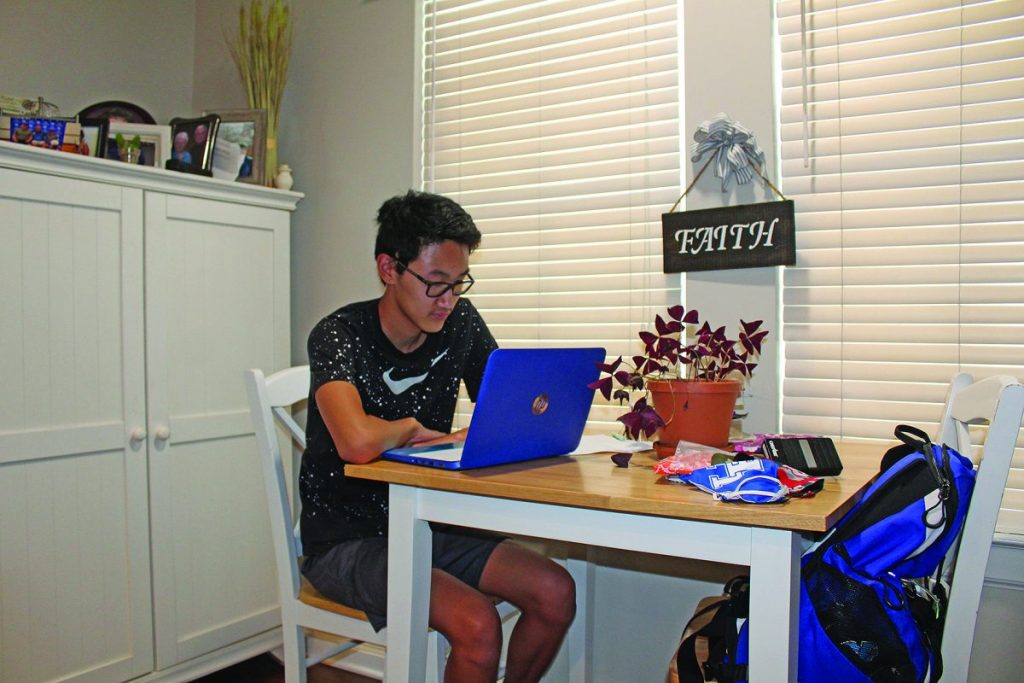 William Rowe, a freshman this year at ACHS, works from home to complete his lessons online through Google Classroom.

The start of school is a time for students to reconnect with their friends, meet their new teachers, show off in their new school clothes and wish they could still be home enjoying summer break. This year, things are quite the opposite.

Classes began Monday for all students enrolled in Adair County Schools. While many students were able to meet teachers during an abbreviated orientation, they are still at home to start the 2020-21 academic calendar.

There have been many opinions espoused on social media and in the general public about the decisions made concerning the choices made. On one side is the “safety first” group that says it is better to be safe than risk the health of students, faculty, and staff. On the other is the “open the doors” group that say the health risks are not high enough to cause students to have to be at home.

One such student is William Rowe, who is beginning his first year at Adair County High School. William is not only a student, but a member of the swim team, whose season could also be affected by changes due to the pandemic.

On Wednesday, William sat working at his computer in the kitchen, reviewing lessons posted to Google Classroom.

“We did some online lessons at the end of last year, so it’s not entirely new,” said William. “After the first two weeks of NTI worksheets, we had Google Classroom stuff. But we didn’t do any Google Meets last year, so that will be different. We will be doing those every week with all our classes.”

Google Meets is how teachers will be interacting directly with students during the coming weeks of virtual lessons. It allows the teacher and students to video conference during the class and see each other face-to-face.

As a freshman, William has four classes: Geometry, Social Studies, IT Computer Literacy, and English II (he took English I as an eighth grader). All four classes are utilizing Google Classroom to post lessons. In addition, they will be using other websites and tools that integrate with Classroom to enhance lessons.

The texts the students have been assigned are posted online as well. “For English, we are reading Anthem by Ayn Rand,” said William, “and it is posted online for us, so we don’t have to keep up with all those books. That’s a good thing.”

William had worked through the first Geography lesson and taken his first quiz by Wednesday. That lesson revealed the first drawback in virtual learning. “There was one question I didn’t really know how to do. I’m used to having a teacher who can explain the problem and show how to do it before I do it. I just had to try it and put in an answer and then it told me if it was wrong or not. Having a teacher help guide us would be good.”

On the other hand, he sees the need for safety. “I’m not worried much for me, but for other people, yes I am. I don’t want to see anyone get sick or anything because we went to school. And I still see my friends even if we aren’t in school. We Facetime and talk a lot. We’ve talked about some of the work we’ve had and helped each other out if we needed it.”

On the athletics side, William said he is looking forward to working with the new coach of the swim team, Nick Coe. At this time, the decision on winter sports has not been made yet by the KHSAA while statewide coaches, athletes, and parents can only look for hope in the form of a successful fall sports season.

William’s father, Fred, is a farmer and his mother Bridget is a teacher at ACPC. Fred came in for lunch Wednesday and said that he was okay with the current setup. “I’d rather them be doing this than having to just shut down and go all summer next year. He’ll be alright.”

William summed up the situation as a student directly affected by what the adults have decided. “It’s odd. Something I haven’t done before. I guess I’ll get used to it as it goes longer. Being in class with a teacher would be good, but I’m sure it’ll work out ok.”