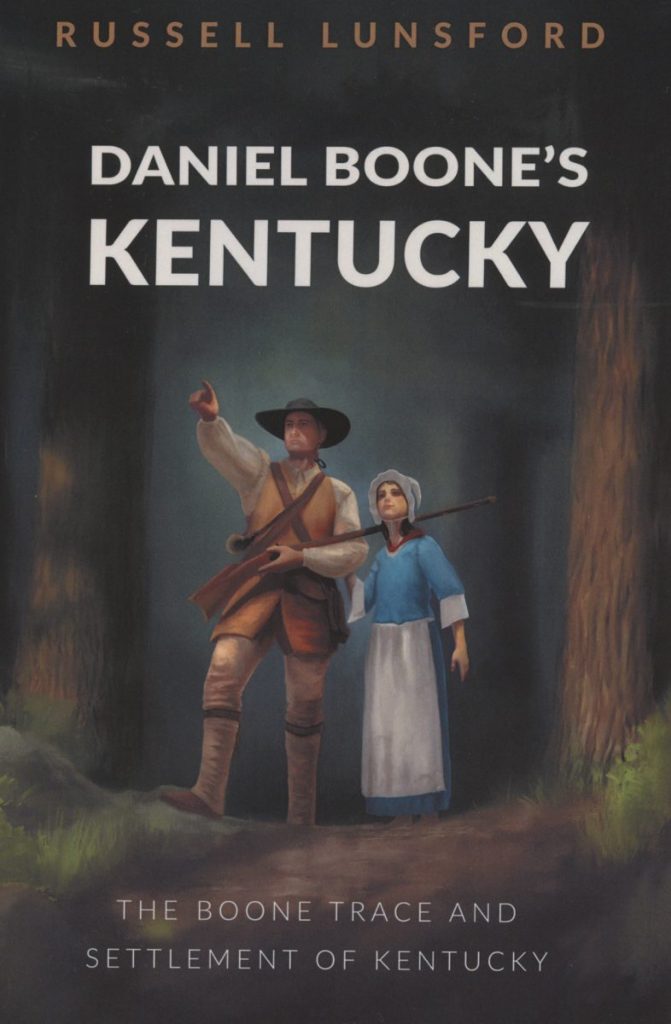 Daniel Boone’s Kentucky is available online at the iUniverse bookstore, Amazon, Barnes and Noble, and elsewhere.

When you open most books or newspapers to learn something about Kentucky, authors and writers will locate you by recalling a city or county, perhaps a historic landmark. The Kentucky that Russell Lunsford explores in his new book, Daniel Boone’s Kentucky, exists in a time before Kentucky had cities or counties and where the historic landmarks were nothing more than the spots people found to rest their heads.

Daniel Boone’s Kentucky is the fourth book from Lunsford, and his third middle-grades historical adventure. His two previous forays into the genre followed Ben Tuggle, a young man from the modern world who magically transports back into the past and brings his modern outlook back to look on the early days of Kentucky and the nation.

This new book doesn’t utilize in-text time travel to bring the reader back in time, rather the story takes its life in the narration of Jemima Boone, Daniel’s 11-years-old daughter. For Lunsford, the decision to use Jemima as his narrator came from both a desire to keep the storyteller at the age of his readers, and a harrowing incident in Jemima’s life that helped pull him into the story.

In July of 1776, a raiding party caught Jemima Boone and two of her friends while they were out floating in a canoe. The raiding party was out harassing white settlers as part of their fight of resistance against the western expansion of the colonists. The party was comprised of Cherokee and Shawnee and hurried the girls north away from the settlement of Boonesborough and into Shawnee lands. The girls attempted to leave signs of their journey and otherwise frustrate their captors, but their efforts were continually frustrated.

Daniel Boone led a party for three days following the trail until, as the raiders prepared the breakfast fire, Boone and his party ambushed them and secured the rescue of Jemima and her friends.

But the story of Boone on the frontier was never simple for Boone, nor is it simple in Lunsford’s telling. Throughout the tale, Jemimah feels the tension her father and her people have in their state of almost unceasing strife with the indigenous peoples they encounter. And while Jemima is definitely on her father’s side, conflicts between the settlers and the tribes are tragic even in their triumphs as every victory for the settlers bears a cost.

The book is not all encounters with raiding parties and daring escapes (though there is a reason Daniel Boone continues to live in the imaginations of Americans), but it is also the daily life on the frontier: making medicines from tree bark and playing lacrosse, where even a thunderstorm or an evening stroll could lead to calamity.

Daniel Boone’s Kentucky opens with maps of Boone’s adventures, the places you’ll become familiar with as you follow Jemima and her father on their adventures. At the end of the book you will find new maps with familiar cities and highways where historical landmarks are something more than the spots where people rested their heads because now you know those people and their world a little bit better.

Apart from authoring history books for younger readers, Mr. Lunsford is also available to visit schools to talk about his books, the history of Kentucky, and writing. To reach Mr. Lunsford about arranging a school or other visit (whenever that might be) go to RussellLunsford.com and select the ‘Contact’ tab. Daniel Boone’s Kentucky is available online at the iUniverse bookstore, Amazon, Barnes and Noble, and elsewhere.