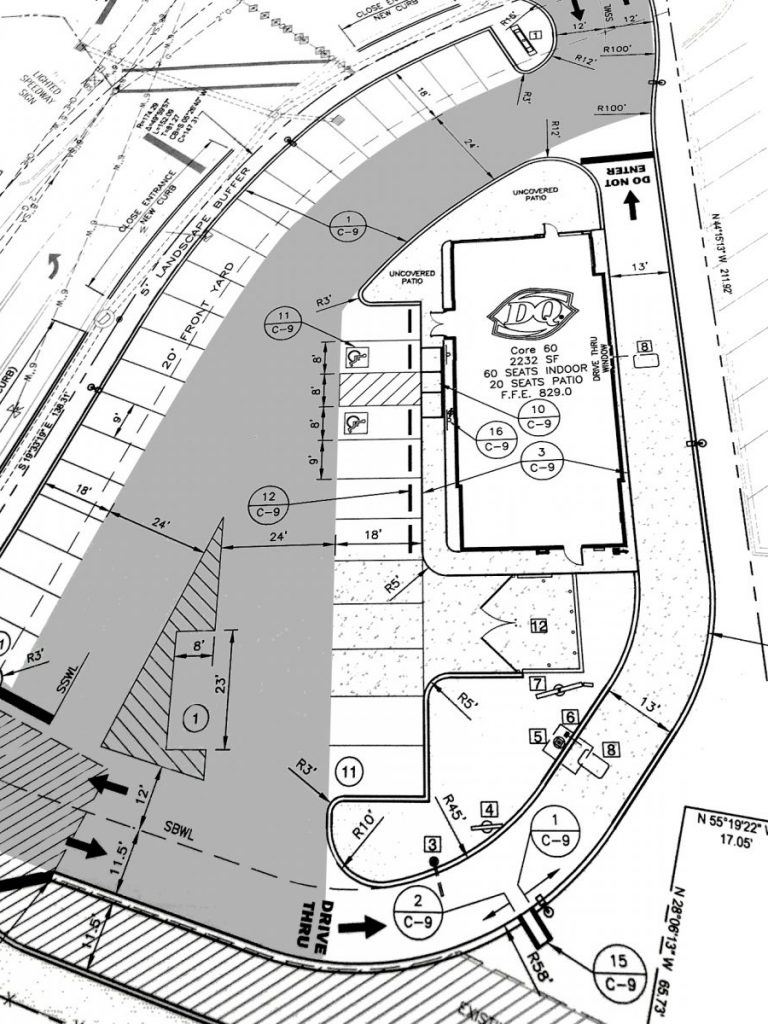 Blizzards, dipped cones, and banana splits have moved one step closer to being added to Adair Countians’ menu.

Monday afternoon the Planning and Zoning Commission met at Columbia City Hall to see final plans for the Dairy Queen restaurant to be constructed at 1101 Jamestown Street. The property is the former site of Performance Auto Repair and Holt’s Service Station. The current buildings will be demolished to make way for the new restaurant.

Ted Wells of 14 Foods, who is the franchisee for the Columbia restaurant, was at the meeting with commissioners to present the final plans and speak about the coming project. “For Dairy Queen, our goal is to be a good business partner with the city and hire good local individuals and help them to progress and get careers. And basically, put smiles on our customers faces and [help make] memories; that’s what Dairy Queen is known for. [We want] to make some money and pay our taxes, and we would love to be part of the community.”

The Planning and Zoning Commission approved the plans presented at the meeting. The final hurdle is for the state to approve the plumbing plans for the new construction. Once that is completed, 14 Foods and Double 7 Construction plan to begin work very soon after.

“We are trying to close on [July] 17. The only thing we have to have before we can close is the plumbing approval from the state. Our timeline right now, if we close on the 17th, we would be able to project opening October 21. We would like to be open before Halloween,” said Wells. “Once we have all the permits, we can mobilize pretty quickly.”

Double 7 Construction is the company that will be building the new restaurant. Wells said they had just finished construction of a restaurant in Princeton and were about to mobilize to come to Columbia. He said that the construction project will be a 90-day buildout.

The restaurant will be a new design, the first of its kind in the U.S. “The new design is a different profile,” said Wells. “Our older style was more vertical – Dairy Queen kind of created the vertical look. This is a lower profile with a cleaner, brighter look. Inside is going to be totally different.” The new design is called a Core 60. It will have 60 indoor seats and 20 outdoor. A total of 32 parking spots will be available, including 21 facing Jamestown Street and 11 along the restaurant.

Wells said the building is ramped up for modern technology and electronics, including Wi-Fi and ordering kiosks. In addition, there will be designated pickup spots for delivery services such as Uber Eats or any other local services.

“We are really looking forward to being part of the community here and can’t wait to get going on the building,” said Wells.

“I’m excited. It has been wonderful working with Ted Wells and Justin Kraus (also of 14 Foods) and I look forward to them being here in Columbia and being part of our community,” said Mayor Pam Hoots.

In a follow-up interview on Tuesday, Mayor Hoots said she had received word that the plumbing plans were approved by the state, clearing the way for the deal to be closed. As of press time Wednesday, the final closing details were not available, but the mayor said she didn’t see any reason there would be any delay.