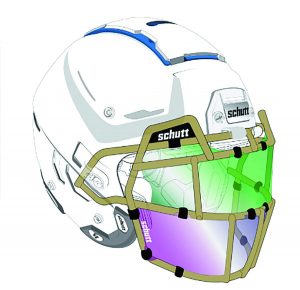 A diagram of the Schutt Splash Shield barrier. The plastic lining is affixed directly to the face mask using a series of Velcro straps and provides a barrier to droplets. The barrier is universally sized to fit all standard facemasks and will be available starting next week.

An hour into Tuesday’s Interim Joint Committee on Education meeting KHSAA Commissioner Julian Tackett spoke with lawmakers about the challenges faced by the association in returning sports safely.

“The association is a bit challenged right now,” Commissioner Tackett said. “The biggest fundraising event we have is cancelled at the request of the department of health and the governor…. One thing I want to stress is that we realize that we’re walking a tightrope here.”

Tackett admitted that athletics present the risk of exposure for everyone involved but encouraged people to weigh those risks against the very real benefits of athletics programs beyond surface-level pride. “We are also in very many communities the number one dropout prevention tool that you have. There are people in our communities that every one of you know would not be participating [in school] if there was not an athletics or activities opportunity. We’re trying to walk that tightrope delicately.”

In a May Zoom meeting between Commissioner Tackett and Kentucky sports reporters, the commissioner stated that summertime decisions regarding athletics would have to come somewhat month-to-month. Decisions for June and parts of July were announced at the end of May, but since the announcement of the first three KHSAA Segments coaches, players, and communities have been left wondering what comes next.

Segment 3 of KHSAA’s reopening has been in effect since June 29 and expires this Sunday, July 12. The guidelines available on KHSAA.org simply state: “Segment 4/ July 13 to July 31 (unless further altered by the Governor or the KHSAA Board of Control) – KHSAA member high schools and all Kentucky middle schools/ TBD.”

That TBD will be filled in by a Friday meeting of the KHSAA Board of Control, the 18 people tasked with providing the best possible scenarios for the continuing reopening of Kentucky sports. “We’ve tried to plan so that what happens in school sports does not inhibit the start of school. With the ramp-up in activity, we’ve had a few districts have to stop that activity, which is exactly as the plan was designed. Address issues at the local level and not necessarily a state edict one way or another. But I will see Friday if our Board of Control feels that way.”

The three districts that had stopped activity as of Tuesday’s meeting included Clay County who has had all their athletics suspended since June 24, Russell Independent Schools in Greenup County whose Superintendent Sean Howe stopped workouts for two of their schools’ teams for the next two weeks after a positive tests came back (the teams and exact counts were unspecified in reports), and Pike County Schools whose practices were suspended last week after a student was directly exposed to coronavirus. Pike County practices were set to resume on Wednesday pending the results of the test.

The KHSAA Board of Control has been monitoring developments, guidance, and progress from sources such as the NFHS (National Federation of State High School Associations), and the NCAA. “We are looking at having fall sports, without doubt. We are still planning for fall sports. What that looks like could change, just like the data related to the virus changes. We are more optimistic now than perhaps a few weeks ago when we see what our neighbor states in Illinois and Indiana have been able to do, [but] we get a little pessimistic when we see what’s going on in Tennessee.”

The relative risk of any given sport or activity isn’t always immediately apparent. Commissioner Tackett discussed the distinction between cross country and track, both outdoor and spaced sports that still presented different levels of risk because whereas track is spread out across events and the races, even the relays, only involved a portion of the team, cross country begins in a mass pool of runners packed tightly together.

As to other sports, the commissioner noted that “As we look forward to basketball, it’s actually – according to the sports medicine folks – more dangerous than football…. but they’re talking about vulnerability to the disease because it’s played inside – the ventilation, how long we practice, how long we play. There’s going to have to be some areas addressed there. Football is changing every day in terms of opportunities for equipment. The two major helmet manufacturing companies – Schutt and Riddell – have issued in past weeks things that can go inside the helmet [see photo].”

While comparing each sport is helpful in illustrating the challenges faced across the spectrum of athletics, the guidelines for each sport have to be tailored to the sports on their own basis. “We have 18 different sports, so we have to talk about those,” Commissioner Tackett said. “The conversations around each sport are unique.”

Senator Wise commented saying, “Sometimes sports and extracurriculars are all that our students have in the Commonwealth. It’s a way also to bond. It’s a way to bring people together to achieve a common goal and I hope that we can get there and I know that there’s many parents and many students and coaches who are depending on us to do this in a safe way, and I think the key word is safe.”

In the first three days of this week positive tests have shut down team functions and paused careers from one end of the country to the other. On Sunday, five members of the men’s basketball team at West Virginia University tested positive for COVID-19, causing that program to suspend workouts until July 20. They join another five Mountaineers, four from football and one from women’s soccer to test positive. Monday five additional Iowa Hawkeyes were placed under isolation after testing positive, bringing that program’s total up to 21 confirmed cases.

Tuesday brought the heaviest such news, with WNBA star and former Lady Cardinal Asia Durr announcing that she would forego the 2020 WNBA season after testing positive. At her alma mater, the Louisville men’s basketball team announced that they were temporarily suspending operations after a pair of positive tests came back Monday. KSHB Kansas City reported that 14 student athletes tested positive at an area high school and activities would be suspended through the week as they awaited results.

In Lake Zurich, Illinois CBSN-Chicago’s Vi Nguyen reported that “Summer athletic camps started Monday, but after the first day of camp, a number of families notified [the district] that their students on the football, baseball, and poms teams had tested positive for COVID-19.” The reporting caused the Lake Zurich camps to shut down. Finally, though not exhaustively, KRON San Francisco reported that the Giants baseball team was suspending their workouts following additional positive test results.

Locally, in south central Kentucky other school boards in the area have already invested much of their CARES and GEERS (Governor’s Emergency Education Relief Fund) money into their students and schools. They have bought Chromebooks and worked deals with internet providers to expand and enhance the affordability of online access for distance learning. They have bought cloth masks for their students, as well as disposable ones for when students inevitably forget.

They have bought up thermometers and cleaners and sanitizers, not just for their classrooms and hallways and cafeterias and bathrooms, but also for their locker rooms and field houses and band rooms and fields and courts. Adair County Schools have not yet had the conversation about how to use those federal and state funds which total $1,214,771, according to the Kentucky Education Association’s report on district allocations.