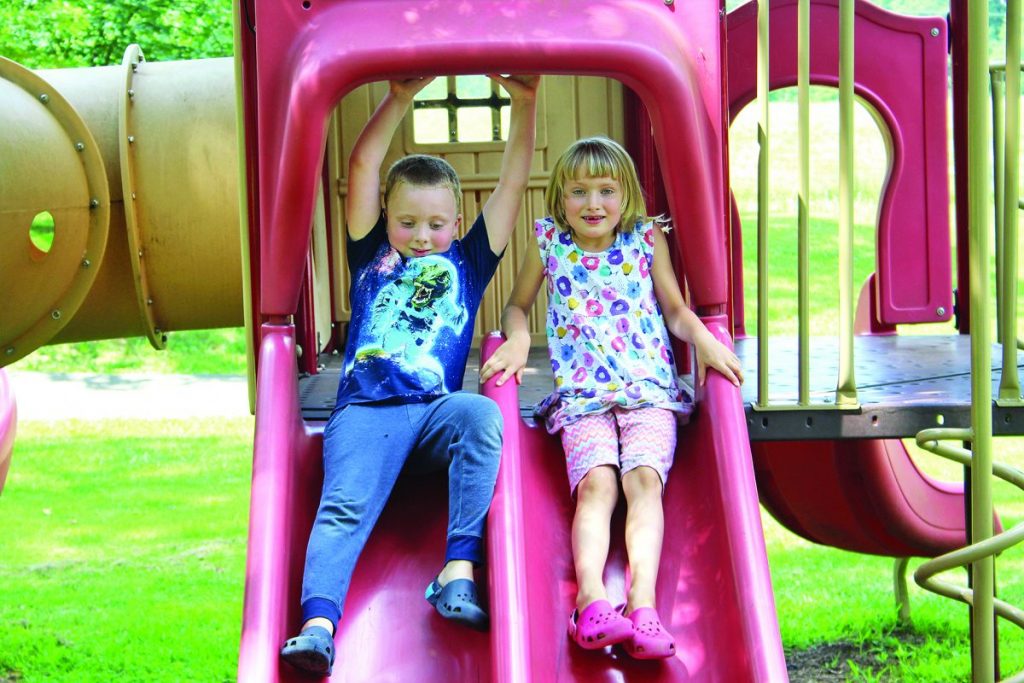 Twins Catlynn and James took time Wednesday morning to enjoy the Roadside Park on Hwy 55 south. The park will now be the property of the City of Columbia.

The City of Columbia will no longer be in partnership with the county to run the Jim Blair Center. The city council voted Monday night to accept the mediation agreement reached of June 30.

As reported last week, the fiscal court voted to accept the mediation agreement at their meeting on last Tuesday, which left only the council vote to make the split official.

At the council meeting, City Attorney Derrick Helm presented the mediation agreement to the city. “We reached a tentative agreement that the fiscal court adopted…which would transfer the city’s liability and debt associated with the Jim Blair Center to the county. In consideration, the county would assume the debt and financial liability of the property. The county agreed to update the basketball court and softball field within one year and to install all new playground equipment within three years.

“It was also part of the agreement that if at any time the county fails to maintain the Jim Blair Center as a community recreational facility in good standing within the next fifty years, the property would revert back solely to the City of Columbia.”

The loss of a park by the city only lasted a few minutes. Mayor Pamela Hoots said she received a letter from the Columbia-Adair County Chamber of Commerce concerning the roadside park on Highway 55 south just outside Columbia and she asked Helm to read the letter into the record.

The letter, signed by Executive Director of the Chamber Ellen Zornes, stated the Chamber would like to deed the park over to the city of Columbia.

“The park has two pavilions, one large and one smaller, both with electricity, a new large in-ground charcoal grill, restroom facilities, and playground with two entrances into the park. Richard Phelps has done a remarkable job with the upkeep of the park and is to be commended. However, with his consent, we would like to humbly request the park be a part of the City of Columbia Parks and Recreation. We simply don’t have the personnel or volunteers for the required upkeep,” the letter stated.

The letter also asked that if the city ever found it necessary to sell the property that 25 percent of the sale price be given to the Chamber.

Mayor Hoots said since she also serves as President of the Chamber of Commerce, she did not take part in any of the conversations concerning the land donation to the city and did not participate in the Chamber vote.

Council member Craig Dean asked whether it would be necessary for the city to annex the property since they would be the owners, but other members did not feel that it was necessary to maintain the park. Dean also asked if it would require hiring an additional worker with the added maintenance.

Dr. Ronald Rogers said another employee would not be necessary just for that park but added that when the Foust property on Burkesville Street begins development, it would be likely that another individual might need to be hired to maintain it.

Mayor Hoots said that the city currently patrols the park and the street department picks up the garbage. She added that Craig Lasley of the Parks and Recreation department said it would take two to three hours to mow it. She suggested that the funding that had been allocated for the Jim Blair Center would be more than enough to cover the maintenance of the roadside park.

The council voted to accept the park and the city will take ownership one the deed is transferred but will begin upkeep on the park immediately.

In other city council business, the members voted to reappoint Caleb Irvin to the tourism board, and appointed Doyle Lloyd to the P.V.A. assessment board, and Vicki Brock Miller to the Columbia Housing Board.

The mayor announced that Guthrie street is off the blacktopping list for now because the water district will be doing some work on the sewer there and they were going to wait for that to be completed before they pave the street.