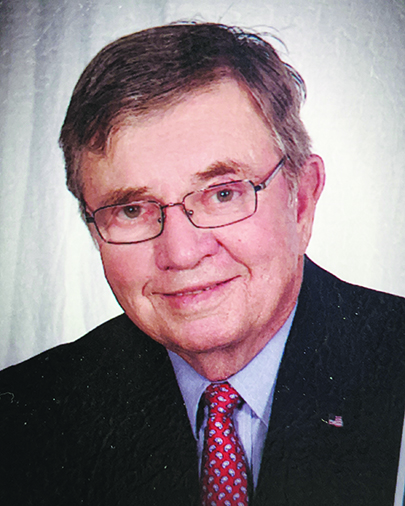 Richard Lee Walker was a prominent citizen of Adair County. He served as Judge Executive for two terms.

They say a legend is a story you know even if you can’t remember ever hearing it before. Richard Lee was a man the people of Adair County knew even if they had never met him before.

Richard Lee Walker was a stalwart supporter of Adair County and its people. Throughout his life, he worked to improve Columbia and Adair County to make it a better place for everyone. On Wednesday, June 24, Mr. Walker passed away in Louisville, surrounded by his wife and children.

His drive to serve the public led Richard Lee to run for County Judge Executive in 1985. In a heavily Republican county like Adair, it is not often a Democrat wins a county-wide election. But Richard Lee won in ‘85 and was re-elected in ‘89.

During his eight years as judge, he brought several improvements to the county. The Annex Building was constructed during his tenure, allowing several county offices to transfer out of the old courthouse building to a more modern space. It was also during his term that the Adair County Health Department broke ground on the facility that they are still in to this day.

Public service didn’t end for Richard Lee when he left office. Just this year, he was making contacts in an effort to help with the gas expansion that the City of Columbia is moving forward with. He remained a local contact for many governors through the years. In addition, Richard Lee served on boards at the Lake Cumberland Health Department, Lindsey Wilson College, and the Chamber of Commerce.

Richard Lee grew up farming as a young man. He served as president of the Adair County FFA in high school before attending Lindsey Wilson College and Western Kentucky University, where he received his bachelor’s degree. After college, he worked for Kyana Milk Producers and Dairymen, Inc, where he was named Outstanding Young Dairy Farmer in 1971.

In 1972, he went into the real estate business with Buck Watson before going on his own with Walker Realty, which has been in operation ever since. In his real estate capacity, he helped bring about the Walmart relocation to its current site. He also helped develop Country Club Estates, which had once been the farm where he grew up working.

One of Richard Lee’s greatest joys was family. He married his wife Marsha in 1963 and they raised two children together, Leigh Ann Parkinson and Dicky Walker. Their grandchildren are Katy Coomer, Abby Walker, and Drake Duncan.

Through the years, Richard Lee had many friends and admirers.

Wid Harris was a magistrate during Richard Lee’s tenure as County Judge Executive. “We worked together very well. One of the best things he got done was getting the Annex Building built here where the old hotel burned down. We would be in rough shape without that today. He was always very active as judge.” Laughing, Harris added, “I really enjoyed serving with him when he wasn’t chewing me out. But seriously, he was always active in the community, in his party and he did a lot for Adair County.”

Mayor Pamela Hoots is in her second stint as Mayor of Columbia. Her first time in office was during Richard Lee’s second term as judge. “Richard Lee was truly an asset to our city and our county. A lot of projects were completed for the city and county during that time. He loved Columbia and Adair County and we will all miss him.”

Current Judge Executive Gale Cowan knew Mr. Walker long before politics. “I have known Richard Lee my whole life. His kids and I showed cattle together growing up. Richard Lee Walker loved his family and he loved Adair County. We were on opposite sides of the fence when it came to politics, but he was one of the first people to congratulate me after I took office.  He came in my office not long after I was elected and congratulated me and told me if I ever needed anything from him to give him a call. I respected him and I considered him a dear friend. Adair County has lost a true icon in Richard Lee Walker.”

Former County Judge Executive Ann Melton recalled her friendship with Richard Lee. “Richard Lee Walker was a family friend, a good political friend, and he was just my buddy. We were hardly ever on the same side of political issues, but we were always on the same side of loving and growing Columbia and Adair County. He had a love for this community that continued until his last days.

“My last conversation with Richard was just two weeks prior to his death. He called the Progress and I could always tell how he was feeling by the sound of his voice. That day he sounded so good and I told him how happy I was to hear his voice so strong and he told me he was feeling good and was on the rebound. We talked about two projects he was working on with the governor’s office for Adair County and I hope those will continue in his name. Those of us lucky enough to have known Richard Lee Walker are sure going to miss our buddy!”

Through his civic duties and raising his family, Richard Lee Walker loved Adair County. He worked to make the city and county a better place to live, always looking for another opportunity to make our community stronger. The people of Adair County have lost a great friend in the man known simply as Richard Lee.