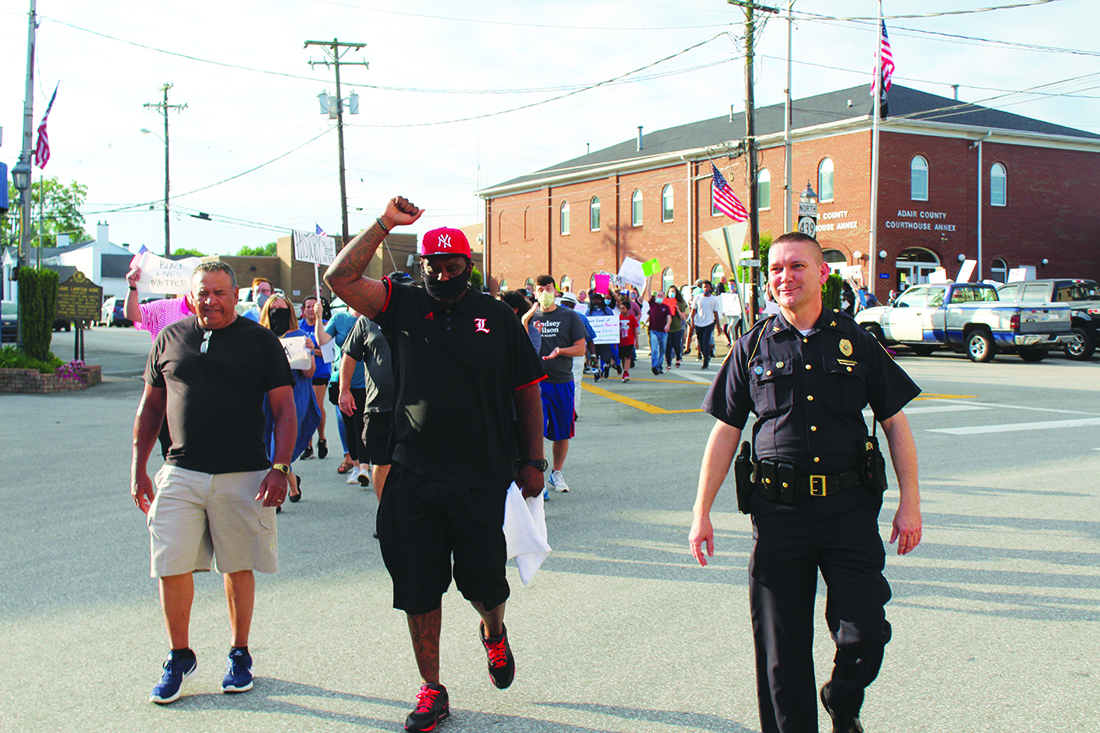 Ministers Sammy Hughes and Russ Wheat and Columbia Police Chief Jason Cross led protestors through the square Tuesday evening. Over 100 people demonstrated in support of justice and creating a better world for everyone who lives in it. Photo by Drew Bergman.

“We had a good turnout at the event tonight,” said Reverend Russ Wheat, one of the featured speakers at Tuesday night’s Unite Columbia rally, “but we still have to stop the racism that is in our county. I know a lot of people do not believe it is here, but it is here.”

Over a hundred protestors gathered together on the steps of the Adair Annex Tuesday evening for the rally which opened with words from Alicia Kemnitz, Lindsey Wilson College’s head swim coach.

“Our main goal is to be here, to stand up against racism and injustice in all its forms,” Kemnitz said, “while also promoting unity in our community. As we stand in solidarity with our Black community as well as the Black community across the country and across the world.”

“In Heaven it’s every nation, it’s every tribe united in Christ,” Bradford said before the benediction. Praying, he said “We know that in Heaven there is perfect unity, perfect peace, there is no hatred, just love. So, let love overcome the day.”

Chief Jason Cross was the next to speak. He began his remarks thanking veterans of every color for their service and sacrifice in defending the rights of Americans before addressing criticisms of law enforcement and his efforts to improve Columbia’s policing. “I’ve been here for over 20 years and I am proud of the fact that I believe our race relations are better with every citizen in our community than they have been in years,” Chief Cross said.

Chief Cross then introduced Rev. Russ Wheat to the assembled crowd. Rev. Wheat began by thanking the crowd “for coming out and supporting the cause for racial equality and justice that we most definitely need in the whole United States of America.”

Rev. Wheat then spoke about the Nine Minutes at Nine protest on Sunday. “I have to take my hat off to the individuals that were protesting the other day on the square and up on top of the hill,” he said. “The thing is they had an individual who came up to them on the square and said to them ‘all lives matter.’ Yes, all lives matter. All lives don’t get pulled over for driving while Black. Black lives do.”

He spoke of the pervasiveness of racism and how it is not limited to police violence, but also manifests itself in how Black people are routinely treated with suspicion even at times that should be cause for celebration such as buying a new home or a new car.

Rev. Wheat invited the people to join him every night from six until seven at the IGA parking lot and ended his remarks with a moment of silence for those who lost their dignity and their lives to systemic racism and violence, highlighting examples throughout the past decades from every corner of the country.

Reverend Sammy Hughes, recently retired from Adair County Middle School, spoke next. “I know that the situations we’ve been looking at are ugly and sickening, but this is not a new thing. It has been going on for some time. Most of you all probably weren’t born during the time when many of us had to deal with this,” he said. “Right here in Columbia when we went to the movies we had to sit in separate rooms. When I was in sixth and seventh grade, we had a rope down the middle of the floor. We wish we could say it will never be that way again.”

From there, Columbia Police Department officers went to work closing off the four access roads to the square. Chief Cross and Rev. Wheat lead the protestors in a march around the square. Chants of “Black Lives Matter,” and “No justice, no peace,” filled the square as marchers filed in and filled out the space. As the group crossed Jamestown Street more chants entered in, calling out the names of George Floyd and Breonna Taylor.

After the march, Dwight Taylor sang a song from the Civil Rights era that he said was a favorite of his grandmother, “Woke Up This Morning.” The song is an update of an old gospel song that was updated by Reverend Robert Wesby while he was incarcerated in the Hinds County jail in Mississippi during the Freedom Rides of 1961.

The final speaker of the march was Corion Moffitt with Lebanon-Marion County Black Lives Matter who addressed the crowd. The demonstrations in Lebanon have also featured members of law enforcement marching with protestors. Moffitt stressed both the need to protest and make use of the public spaces and rights guaranteed by law as well as using the political power of the vote.

“You have got to let your voices be heard. I know everybody has their part to play in this, but the more voices and the more people being heard is the more that we are going to be done,” he said. “I want to see positive change. I want to lead the way for the youth, so they don’t have to deal with these kinds of things…. You have to get out and vote. Some of these people may not have your best interest at heart so go out and vote.”

He ended his remarks by inviting everyone to raise their fists in the air, “Let Adair County hear y’all, let Columbia hear y’all, let the world hear y’all because everyone is standing up right now.” The crowd picked back up the chants with a final resounding “No justice, no peace,” and “Black lives matter.”

After the Unite Columbia protest ended, Chief Cross reflected on the local protest as well as the events near and far that have brought the community to this point.

“Like everybody, we see the news. We know what brought this on, it was a tragic incident, there’s been several of those tragic incidents,” Chief Cross said. “We don’t condone that in any way here. The Columbia Police Department has always taken the approach that we won’t condone hate, violence, or racism in any form by anybody or any group.” Chief Cross said he was proud that he and his department have built a strong relationship with leaders in the Black community in Columbia.

“We have a great relationship with them, and we’ve always worked on race relations and we’ve done that through community-oriented policing,” he said. Chief Cross credits the hiring process of the Columbia Police Department with weeding out potentially problematic officers. “We really critique who we hire, we go through the background. That’s not to say that somebody can’t get through that doesn’t need to be an officer, but we’ve been fortunate, and we’ve kept that out.”

Chief Cross stated that he stresses to his officers that they are to be the example of people the community can be proud of. “We’re going to continue to do better and work on those things.”

While the main protest was wrapping up and old friend were bidding each other a good night, a group of younger protestors continued their demonstration down to the fountain in front of the Adair County Justice Center before going up to the IGA parking lot where Rev. Wheat holds his nightly protest.

The group stayed out for an hour, continuing their chants as people drove by. Many drivers kept moving along, some looked visibly confused as they passed, a few revved their engines as a sign of hostility, to the group. But for every person who pushed the RPMs on their car or truck there were several more who honked their horns or held up their fists or cheered in support.

“If you want to, join me at the IGA parking lot every night from six o’clock to seven o’clock. I’ll be there with my Black Lives Matter sign,” said Rev. Wheat. “If you want to come protest with me, you’re more than welcome to come up there.”