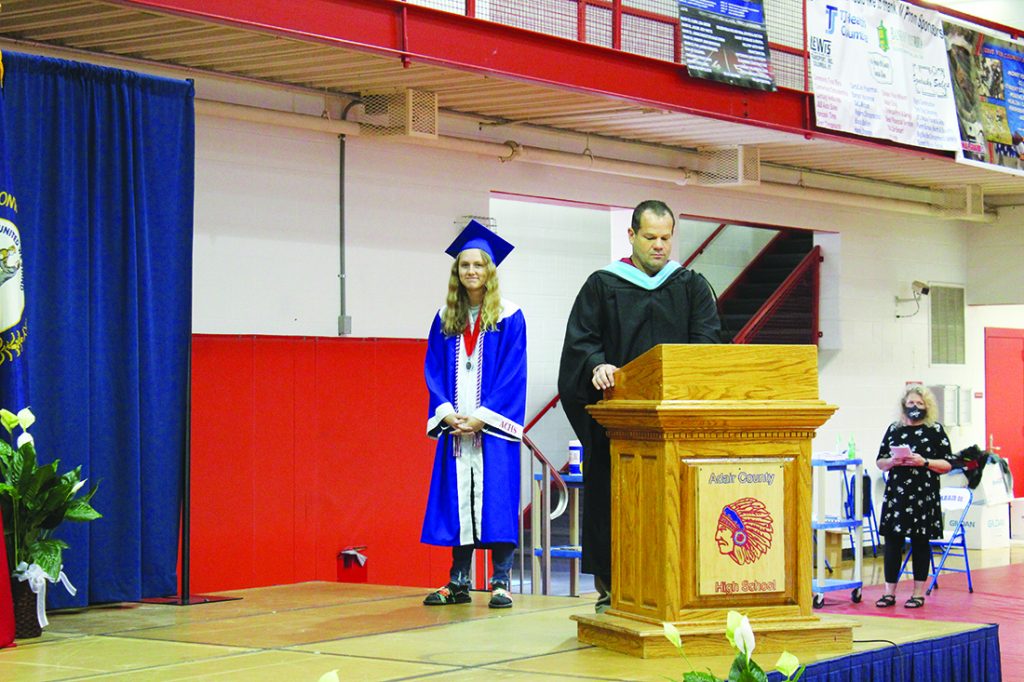 Rebecca Mahieu and Principal Troy Young await their cue to commence her commencement on Thursday afternoon. Over 160 graduates in the class of 2020 marked the official end of their ACHS careers in this manner. Photo by Drew Bergman. 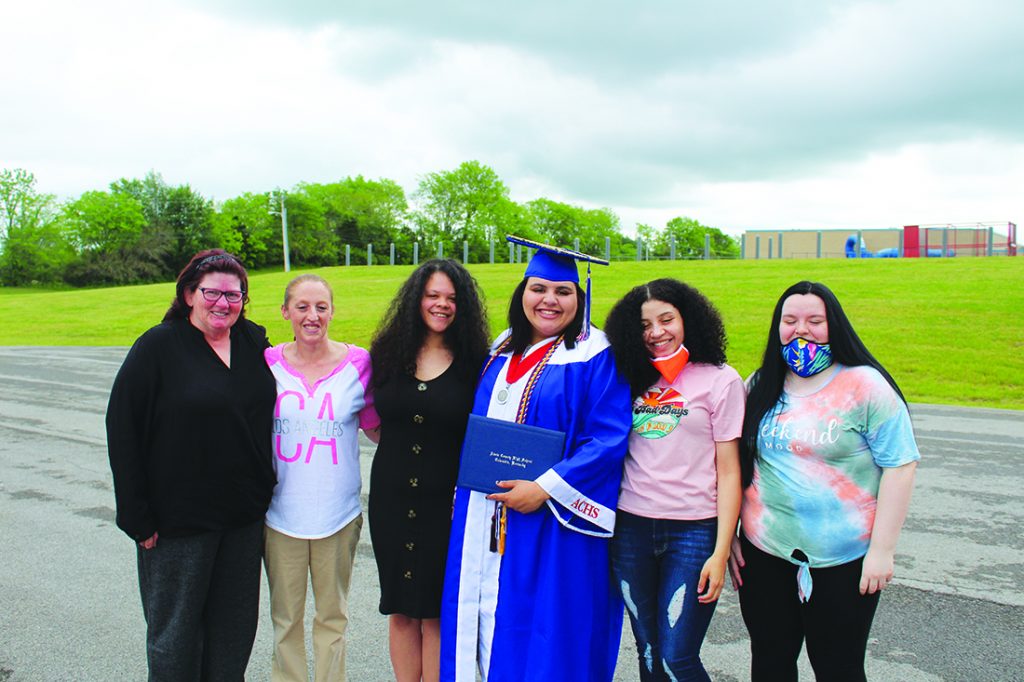 The past two months have set one challenge after another at the feet of students and educators and with this past week’s commencement, the class of 2020 celebrated their successes in meeting those challenges.

“It’s been really unique,” said Assistant Principal Chad Parnell. “We’re used to spending two to three days practicing and then getting everything ready to go.” Instead, this year’s graduation went over three days with each student getting prepared mere minutes before they cross the stage and take their diploma case.

“It’s been a long process and it’s been awfully rewarding,” said Principal Troy Young, who along with other administrators and student leaders has helped to plan this graduation ceremony.

Part of the decision that was made was for the administrative presence to be limited to allow more family members to attend. Up to six loved ones were invited to join each graduate in John Burr Gymnasium whose maximum occupancy had been reduced to ten.

Though she gave up her spot at the graduation for the sake of the families of her students, Superintendent Pamela Stephens still recorded her remarks to be included in the graduation video.

Also recording remarks were Principal Young, Jeanene Pike, Kiley Feese, Maggie Young, and Nikki Bair. “All those will be edited in,” Mr. Parnell said. “If you’re just sitting there watching it’s going to look like the real deal.”

In one way at least, the recording will be better than the real deal. “Normally, I’ll practice the names for hours just to be sure that I get all the names and cadence correct,” said Mr. Young. “Now if I was to mess up on a name, we can just back them back up and redo it.”

Mr. Parnell will be editing the video together over the course of the week or so, getting the best takes of Mr. Young and the graduates and placing the graduates into alphabetical order. When he has it completed, the school will send out a link to watch the video online. The video may become public, with the permission of the students.
“It’s been a rather unique situation,” Mr. Young said. “The graduates have been great, the families have been great. We’re just trying to recognize them for their accomplishments and let them get their recognition because I know it was cut short in various ways.”
Though the students participated in a spirited parade last Tuesday that made up for some of the missing moments of this spring, it could not hope to replace what the class of 2020 lost in terms of time together. “I really enjoyed the parade,” Mr. Young said. “Of all the graduation events the thing I miss the most is the walkthrough. There they [could] go back and see teachers they had and walk through each and every school.”

Still, Adair County High School, it’s teachers, parents, students, and administrators did manage to make the best of the situation they were presented with.

“It’s really weird,” Mr. Young said, “but we’re trying to do what we can for the seniors.”

There had been talk before the graduation of having a second, traditional, graduation after the summer when Kentucky was, hopefully, further into opening back up and more of the students and their families could come together. However for the time being, that plan may not come together.
“We do have some dates set for traditional [graduation],” Mr. Young said, “but you would still have to have a certain percentage [of students] that’s willing to come back and do that and the more that you talk to people after the fact, don’t really want to come back and do that.”

With so many graduates going off to college or trade school, the military or other jobs, their lives will have simply moved on.

But then again, that’s a big part of what commencement celebrates, the beginnings of something new in the midst of what was.