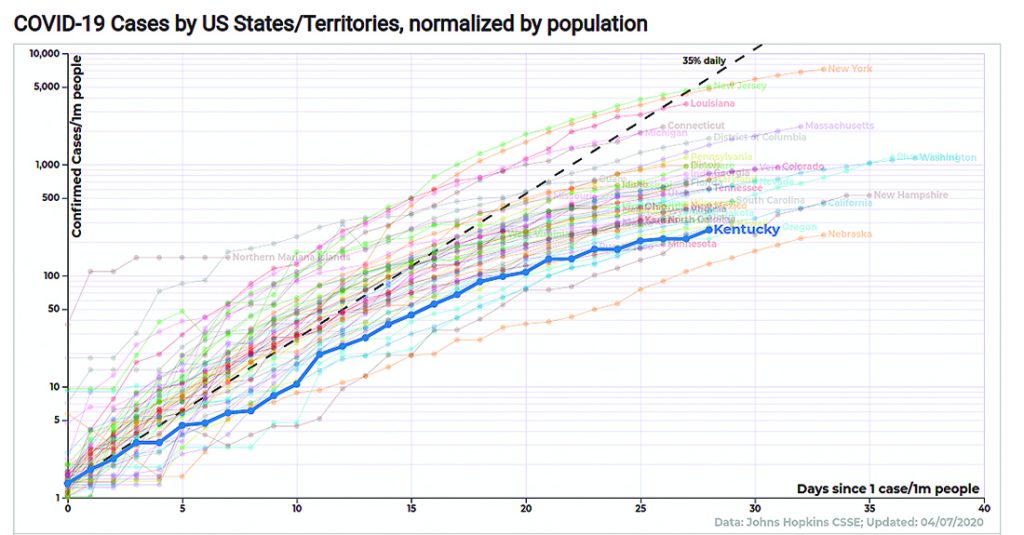 Covid-19 continues to increase around the Commonwealth and our region is no exception. As of press time, there have been nine confirmed cases of the novel coronavirus in Adair County, seven are current cases. six of the seven cases are hospitalized and one is in self-isolation. The first virus-related death in Adair County occurred this week. The deceased was a resident of Summit Manor nursing home. There is one other confirmed case there as well. The remaining case has been released from isolation.

In her statement released Tuesday morning, Judge Cowan confirmed that a resident at Summit Manor who had been hospitalized had died from the virus. Summit Manor said that their staff is working closely with the Lake Cumberland District Health Department to take every step possible to protect the staff and patients at the long-term care facility. Cowan further encouraged the public to stay home during this time. She stated in her press release, “I know its hard, but we need to remember, the quicker we do what is asked of us….the quicker this will be over.” She also asked for continued prayers for the family of the deceased, those currently infected, and the front line workers in the community.

Lake Cumberland District Health Department also reiterated the need to remain at home. “Regardless of the confirmed case count for any Lake Cumberland County, we believe COVID-19 to be widespread,” the department said.

With that in mind, here are the announcements and steps taken in Frankfort.

With the longest March now behind us and Easter Sunday just ahead, we continue to assess where we are as a people. This article is the third tracking the progress of Governor Beshear’s response to the coronavirus pandemic. As with the previous articles in this series, the number of confirmed coronavirus cases in the state will appear in parenthesis after the date. This week we saw the marking of the first full month since Kentucky had its first case as well as our state crossing the 1,000-case threshold.

April 1, 2020 (687): Governor Beshear reiterated his call to Kentuckians to complete their census, the census is used to determine federal allocations of resources which will be critical for rebuilding as well as congressional representation, the Census is also mandated in Article 1, Section 2 of the United States Constitution.

April 2, 2020 (770): The governor recommended that school districts statewide extend the suspension of in-person instruction until at least May 1; ​commuted the sentences of 186 inmates identified as being medically vulnerable to the coronavirus, and announced plans to commute the sentences of another 743 inmates in state custody who are due to complete their sentences within the next six months, only those inmates held for non-violent, non-sexual offenses are eligible; announced that, beginning Friday, all Kentucky State Parks will be closed to overnight stays, parks facilities will be open for use during daytime hours (7:00 a.m. to 7:00 p.m.) as long as visitors maintain proper social distancing; announced the imminent conversion of the state fairgrounds in Louisville into a 2,000-bed field hospital; asked anyone who could make donations of gloves or other PPE supplies to call the National Guard Hotline at 502-607-6844 or go to tinyurl.com/KYEMCOVID (the state would have its own hotline and website April 3, see below).

​Announced Gov. Beshear expanded a recent order restricting travel to include people from out of state coming into the commonwealth. Anyone from out of state has to follow the same travel restrictions as Kentuckians. If people want to stay in Kentucky with a family member or friend for the duration of the COVID-19 crisis, that is okay, but they need to quarantine for 14 days when they get here and not travel anywhere else.

April 3, 2020 (831): The governor announced a new hotline and website to streamline the process of collecting donations of personal protective equipment (PPE); the hotline number is 1-833-GIVE PPE and website is giveppe.ky.gov; PPE donations now will be accepted at all 16 Kentucky State Police posts across the commonwealth and at Transportation Cabinet offices in Louisville and Lexington.

April 4, 2020 (917): Governor Beshear announced that Kentucky is adopting new guidance from the CDC and recommending that people wear cloth masks in some situations on a voluntary basis, the governor stressed that wearing a cloth mask is not a replacement for social distancing.

April 5, 2020 (955): Governor Beshear announced that the state has entered into an agreement with Gravity Diagnostics for the company to provide up to 2,000 coronavirus tests a day.

April 6, 2020 (1008): The governor recognized this day as the one-month mark from the state’s first confirmed case of coronavirus, as well as the day we officially passed the 1,000 confirmed-case threshold against 19,000 confirmed tests; the state has increased its hospital bed capacity to approximately 23,000 from a previous capacity of approximately 18,000; also quarantined first responders will be kept in quarantine at cabins in Kentucky’s state parks; the lodges are being set aside as potential field hospitals for caring for those infected with coronavirus.

April 7, 2020 (1149): Governor Beshear announced the state’s largest single-day jump in confirmed cases after warning over the weekend that weekend reporting was likely artificially low owing in part to different reporting schedules by private testing sites over the weekend; Deputy Secretary Hosh Benton of the Education & Workforce Development Cabinet announced that by the end of the week the cabinet plans to have between 1,000 and 1,200 people staffing the unemployment hotline, up from their regular hotline staff of 12.