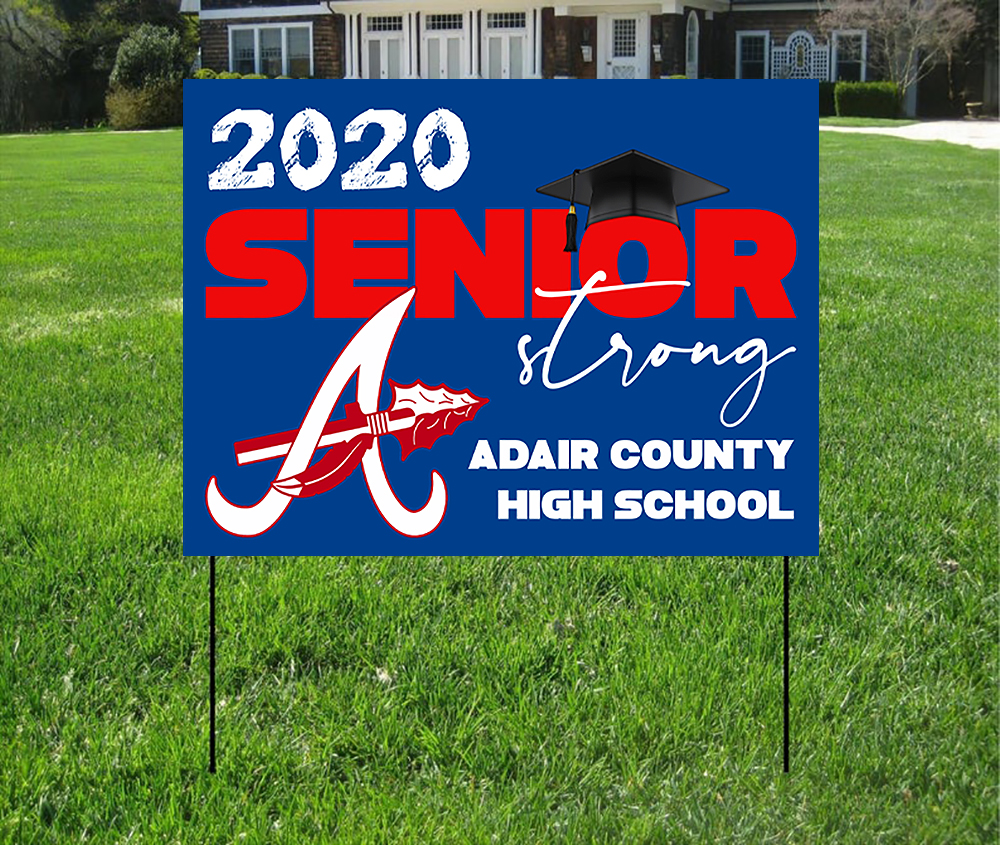 Many people have been affected by the restrictions placed all over the country due to the COVID-19 novel coronavirus. One of the groups that may be overlooked is the seniors all around the nation who were anticipating senior prom and graduation in just a few more weeks. It is a rite of passage that we have all taken for granted in the past. The virus has put a hold on all of that. One local resident decided those students who are missing out on this spring ritual should be recognized and set about doing something to change that.

Andrea Waggener reached out to Ann Young, guidance counselor at Adair County High School with an idea. “I wanted to do something for our seniors in Adair County. As we talked, we thought we could do something that was the same for everyone and we could get the seniors recognized,” said Waggener. They decided to try to see about getting signs made that each senior could each put in their yard at home.

Waggener then put in a call to Trifecta Print + Design to see about the cost of getting signs printed. They gave a quote that she felt was very reasonable to get both the signs and metal stakes. From there, Waggener created a design for the sign and posted the idea on Facebook. The goal was to raise $1,200 to get a sign for each senior. Waggener was unsure if they would meet the goal or not due so many people not working at this time.

“We reached the goal by the end of the night,” remarked Waggener. “Enough people called or messaged me and pledged an amount to donate to meet the amount we were needing. We had people from as far away as Lexington who pledged to donate. Some are mailing a check, and some sent it through PayPal. Once we have all of the pledges in, we should have enough to get this done.”

In fact, there are enough pledges that Waggener hopes to do something else for the seniors. “The plan is to make a bigger version of the sign that we hope to get permission to put at the courthouse.” She plans to seek permission from the county to put the sign on the Greensburg Street side of the courthouse.

When asked how this all came about, Waggener was blunt in her response. “I found myself getting in a funk, and I was getting frustrated with how everything was working, and things didn’t seem to be improving. I wanted to do something that was going to be good for my soul and by getting other people involved and giving them a chance to donate it would help them feel good about doing something for someone else, too.”

Once the signs are printed, Waggener said they hope to be able to distribute the signs at the high school. She plans to set up on the sidewalk out front so no one will have to get out of the car. “We will wear gloves, so we do not have any contamination. They can drive up, tell us their senior’s name and we can cross them off the list. We are only going to give one per student to make sure that every senior gets one. If we end up with extra, we may be able to look at giving them to grandparents or something but we definitely not until we know every senior has one.”

At the moment, they have enough money to buy 200 signs and the large banner. If there is any money still left, it will go toward doing something else for the seniors.

Waggener said the donations didn’t just come from parents of seniors. “We had two businesses donate and several individuals who just said they wanted to do something to help because they remember how important graduation was to them. Some parents paid for a sign for their own student and then paid so another could get one. It was really amazing the amount of support that came from the community.”

Waggener also mentioned the students who would have been participating in spring sports and are missing out on the entire season. “It just breaks my heart that all of these kids, seniors or not, are missing out on their season. The spring sports didn’t even get to start and now it’s over. Some of the seniors who might have just been getting to finally start are not going to get to do that now.”

Previously, Waggener was also involved in doing digital announcements for seniors. That idea came from her friend Rita Murrell. Graduation invitations are not being sent out since it is unclear when it will take place. She has a grandson who is graduating and wanted to be able to acknowledge him and let people know he is graduating. Waggener created the digital announcement to post to social media and then offered her services to create them for other parents who wanted one.

Waggener said she hoped they could get the order place this week and have the signs within a couple of weeks.

“We live in such a wonderful community that really wants to help each other,” said Waggener. “I want to thank everyone who made this all possible. My part in this was small. Everyone else who made the donations are the ones who deserve the credit and my thanks.”