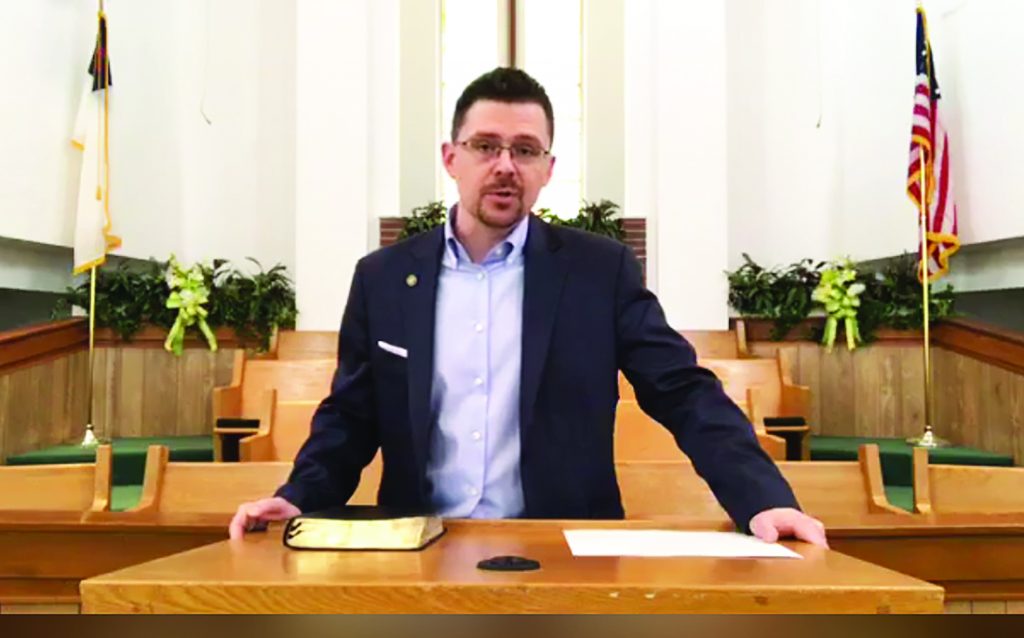 It has now been one month since Kentucky saw its first case of coronavirus and in that time the governor has asked a lot of the citizens. Among the first and hardest asks was when he first requested, and later required, churches to suspend their in-person services until the coronavirus emergency had abated.

Now, Christians across the Commonwealth and across the world will be celebrating Easter as they have not done in living memory–alone and at home. Maintaining a sense of community among their congregants had been, before now, a matter of hospitality and familiarity and outreach, now it is a matter of phone calls and livestreams.
Among the churches and pastors weathering the storm is Columbia Christian Church and their head minister, John Davis.

“It’s a strange providence that the Lord is having us do this,” Bro. John said. “One of the religious aspects to all of this, initially, was the resistance of churches to close their doors. Scripture calls us to meet together every single week.

“Lately, there’s been a shift where churches are beginning to realize that this is more than just governmental, this is more than just politics, this seems like a strange providence of the Lord that he’s allowing us to go through this right now up to the point that we can’t meet together and worship like we do.”

The initial resistance by most churches has given way as services take new shapes and clergy have adapted to the new temporary normal. “We would not be loving our neighbors,” Bro. John said, “We would be in rebellion against the government, which is unbiblical, if we continued to meet, so we had to come to a point where we shifted. The most obedient thing for the Lord right now would be to cancel our services.”

As far as the makeup of the new services goes, Columbia Christian is not looking to break the mold. “Like most churches, we’re doing a Facebook Live sermon on Sunday and we have other things on Facebook Live throughout the week like devotionals or a Wednesday evening Bible study.”

The church elders and ministers have divided up their rolls to be able to quickly reach out to each member of the church and check on their well-being at this time. They have already gone through their lists and will continue checking in as long as their face-to-face community is prohibited. “We’ve got little things that might do here or there, but that’s the main focus of it all, staying in contact with everybody and allowing people to get some Bible study together at the same time on Sunday morning and Wednesday evening and throughout the week.”

This week being Holy Week, many churches and Christians are feeling an additional longing for community. For denominations that recognize holy days, Easter is the most important of the year, the celebration of Christ’s victory over death. The week leading up to Easter Sunday begins with Palm Sunday and continues with Holy Thursday (today) commemorating the Last Supper and Good Friday, tomorrow, which commemorates Christ’s crucifixion.

This Good Friday was supposed to be an occasion for Columbia Christian Christian to host an ecumenical service in fellowship with Trinity United Methodist Church and Columbia Baptist Church. And while the in-person service is another sacrifice asked of the community, an online service is still being held at 12:05 p.m. on the Columbia Christian Facebook page.

“The service is a joint effort that was started by the ministerial association and Steve Pescosolido over at Trinity UMC. Steve’s the president of the ministerial association and heading that,” Bro. John said. “Before this, we always did an Ash Wednesday service at one of the churches and a Good Friday service at one of the churches. We were going to have this community service at our church. Brother Steve’s going to talk a bit and Brother Randy Johnson from Columbia Baptist is going to pray at the service, too. It’s an ecumenical service where we’ll have multiple denominations and churches coming together.”

Fortunately for the pastors, they have had a few weeks to get used to the technology and acclimate to the requirements it places on their work. Unfortunately, the reality is that as much as we can use technology to overcome the changes and the distancing, the distancing is still an impediment. “Especially the first few weeks I was not as effective at preaching,” Bro. John said. “I never realized until this started that the connection to the people in front of you is huge. It’s just huge.

“I try to make my sermons a tad shorter but having said that, they’re not much shorter. One of the things I’m trying to do is to speak more clearly and to be more simple and accessible because I know there is a greater number of kids who are watching with their families.”

Attuning his message to be more accessible to kids and slowing down the pace will, hopefully, also help to overcome another obstacle to online ministry. “I can’t see people’s faces,” Bro. John said. “I can’t interact with people. I can’t look out and see someone who’s not tracking with what I’m saying so I need to explain it a little better. I can’t see that another person over there is giving me a nod so I can tell that I have this connection with some of the people out there and I don’t have any of that anymore.”

Brother John describes the overall experience of going online as a bit of trial-and-error and he recognizes that even when everything appears to be running smoothly as he preaches to the iPad that sits in place of his people, no system is perfect. “When you do your Facebook Live stream on Sunday sometimes it messes up and all of a sudden people can’t hear the sermon,” he said. “The first time I did a Wednesday night Bible study from my office on Facebook Live, there were three or four times where I just sat there for a second as I was teaching and thought maybe no one’s hearing this.”

While Columbia Christian has made the switch into digital spaces for the time being, they are mindful that this is only temporary and actively looking forward to being able to get back together as a community.

“This is not a replacement for the weekly gathering. I want people to miss the weekly gathering. I want people to have an ache for it to come back. Once we’re able to start meeting together again we might think about a greater online presence, but we’re going to end our Sunday morning Facebook Live feed. We’re going to end it because we want people to have the desire to gather together. We don’t think you can church at home because of what the Bible talks about what church is,” he said.