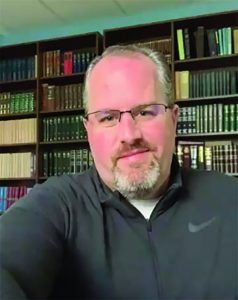 This is the first in a series of weekly articles in The Adair Progress about how churches in Adair County are adapting to the social distancing restrictions brought on by the coronavirus pandemic.

This past Sunday was the first in which churches were ordered closed to in-person service following weeks of tighter and tighter restrictions to any and all in-person gatherings. Columbia Baptist Church had stayed on top of the developments coming out of Frankfort from the jump and has remained proactive with transitioning their ministry from their sanctuary on Greensburg Street to the world wide web.

“The first Sunday when the coronavirus really became an issue (March 8) we put out a statement and told people that if they’re sick, not feeling well or have a low immune system to please stay home,” Pastor Randy Johnson, the senior pastor of Columbia Baptist said.

“We also told people that we would gather together for worship, that we would be on the radio locally on 92.7 at 10:30 so they could tune in and that the sermon would be available on our website.”

As the days of the week came and went restrictions on gatherings became tighter and tighter, by Monday Governor Beshear announced that social gatherings should be limited to no more than 50 people.

By the following Wednesday, March 11, Governor Beshear had announced the cancellation of the Governor’s Prayer Breakfast, recommended social distancing for everybody, no longer just high-risk individuals, and released his first recommendation that all community gatherings, be canceled or postponed.

“When it went to 50 that Monday, we decided that we would purchase a camera that would allow us to stream to multiple places in the same time,” Pastor Randy said. At the time, the plan was for him to be joined by Family Pastor Aaron LaBarge a few light and sound people so that their small crew could put on a production from the church.

By this past weekend the limit was down again and church doors were to be closed.

“We decided then that we were going to get it down to five,” Pastor Randy said. “Our family ministry intern, our family minister, myself, our computer guy and our sound guy were the only five people in the building.” The Pastors prayed and preached in the heart of the sanctuary and played their worship music up on the screen and livestreamed across Facebook and YouTube.

Their Facebook livestream alone was seen by over 1,300 people.

“I think what it’s doing,” said Pastor Randy, “in this time of sickness this time of uncertainty and this time of frustration is that it’s getting the message what God says in his Word, the message or Jesus out to people who would never walk into a sanctuary, but they are willing to click on their computer and they’re willing to watch for a few minutes or the entire hour. They might share it with somebody who needs to see it who has no connection to our church.”

Pastor Randy sees this as a wide-reaching opportunity for ministry, noting that everyone from the smallest church to the largest megachurch has the same ability to reach and get their message out to the world. All that’s needed is a phone and the internet. “Everyone is on equal playing ground now.”

Nearly every church Pastor Randy knows has expanded their online outreach, and what he’s seeing in real time is that the effect. “I see this as a unique time for the church where God is using this moment for us to get the message out. We’re afraid the virus will get out and spread exponentially,” he said, “but it’s the Word of God that’s getting out there exponentially.”

Apart from Sunday services Columbia Baptist Church, like most churches, has groups that until recently had met during the week. In place of those, Pastors Randy and Aaron have been stepping up their efforts with daily devotionals that can be found online through social media.

“We’re getting great encouragement with these and it’s helped me, and it’s helped Aaron because it keeps us engaged with our people when we can’t see them face-to-face.”
Another effect of services going online is that it’s giving people something new to binge. “On Sunday people were saying ‘Hey, I’m not binging Netflix, I’m binging worship services.’” People were online talking about their excitement at getting to watch three and even four services. “That would have never happened without the coronavirus.”

Pastor Randy and his staff were able to make a smooth transition because of the help and support they are able to provide each other. He was able to look down the lens of their new camera and see in his heart the faces of the people he was able to reach online when public health concerns decided he couldn’t in person.
He had the following message for churches that had not yet made the transition to remind them that there is help available for them to transition online.

“To any church,” Pastor Randy said, “that has not gone virtual for whatever lack of tech they might have I would encourage you to reach out to a church that has gone virtual and find a way to make it possible. Use a smart phone.
“You don’t have to use new technology…. Churches will let you borrow cameras. I would encourage any church that has gone virtual, don’t wait. Let this Sunday be your first Sunday to go virtual, even if it’s clunky and a bit awkward we may be doing this for the next several weeks. Don’t waste this opportunity. Start this Sunday do your best and give it to the glory of God.”