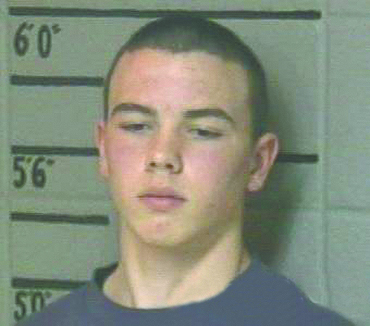 Blake Walker, 2004, at the time of his transfer to adult facility.

In the last days of his term, Governor Matt Bevin exercised his right to pardon several individuals who were convicted of crimes.

Among those he selected to pardon was Blake Walker. Walker was convicted in 2003 of two counts of murder. He plead guilty in Adair County Circuit Court to the murder of his parents, Barbara Peterson and Brian Walker.

In 2002, Walker shot his father once in the head with a rifle and then shot his mother multiple times.

At his sentencing hearing, Walker wanted to explain why he killed his parents. He stated, “My father would yell, scream and cuss at me for the least little thing. The emotional roller coaster with my father never slowed down or ended.”

As for his mother, he could not explain why he did it. “She was the most loving, kind person I’ve ever known, and I don’t know why she had to be involved.”

Walker was sentenced to life in prison without the possibility of parole for 25 years. He was sixteen at the time of the murders.

Commonwealth Attorney Brian Wright, who prosecuted the Walker case, took issue with the pardon. In an NPR interview, he stated, “it was a disturbing case for the community, for that family. And as it stands now, one man made the decision that this is what ought to be done. Now Blake Walker is a free man with no supervision, no conditions attached to his release and granted a full pardon.”

The pardon of Walker was just one of 428 pardons and commutations Bevin signed.  Some of those the former governor pardoned include rapists, murderers and drug offenders. One pardon in particular that caused outrage was the pardon of 41-year-old Micah Schoettle who was convicted just last year of raping a nine-year-old child. He was sentenced to serve 23 years in prison but served only one.

The text of the executive order to pardon Walker reads:

WHEREAS, Blake Peterson Walker was convicted in Adair County Circuit Court in 2003 of two counts of murder; and

WHEREAS, it is not possible for me to capture my full thought process as I have weighed the decision of how to handle the commutation and pardon request from Blake Walker; and

WHEREAS, Blake Walker is blessed by a loving and forgiving family and it is this alone that tips the delicate balance in the direction of his request; and

WHEREAS, Blake Walker committed a crime for which only God can provide true forgiveness. Even so, with the authority granted to be by the Kentucky Constitution, I hereby commute his sentence and pardon him so that he can proceed with his life, unrestricted in his efforts to serve the world and the needs of others in a way that would best honor the lives and life work of his mother and father:

Done at the Capitol, in the City of Frankfort, this 6th day of December, in the year of our Lord Two Thousand and Nineteen and in the year of the Commonwealth the Two Hundred Twenty Eighth.