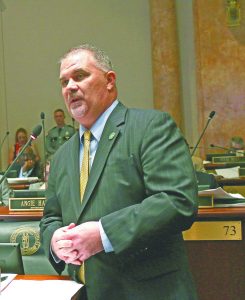 According to his family, Carney went to the emergency room at Taylor Regional Hospital early that Monday morning and was transferred to Norton Hospital in Louisville a little while later.

Carney was diagnosed with pancreatitis and had two surgeries on Monday according to a social media post by his family.

“On behalf of my entire family, we want to thank everyone for your prayers of healing and words of encouragement and support for Bam and our entire family during this sudden sickness he is dealing with. He is in Norton’s hospital with a severe case of pancreatitis and lots of infection. After he had went to church Sunday, he was eating lunch at mom’s house and after only 2 or 3 bites he started getting real sick and we thought it was a virus. Went to emergency room around 4 am Monday morning. Quickly diagnosed as a very sick man with pancreatitis, sugar level at 590 and white blood count real high. Sent to Norton’s. They had five cases that day and said his was by far and away the worse they had. Had two surgeries late Monday. Been in ICU since then. Some things got critical today. Have started dialysis to assist the kidneys in their work and clean the blood. Doctors say he is probably the sickest patient they have in hospital now. We have a cousin who is a nurse who came up today and gave the family some positive encouragement. Could have feeding tubes for weeks and drain tubes for months. We are so thankful to God and His healing powers and so grateful for everyone who is praying. God Bless you all.”

“On behalf of Bam’s family, we want to thank everyone for their continued prayers and words of encouragement for Bam and our entire family. As many of you know, Thursday was a very hard day but thanks be to God, improvements have been made the past two days. Doctors were encouraged today, but reminded us that he is still a very sick man. As they’ve said, ‘we are not out of the woods yet but at this time, we are headed in the right direction.’ We give all the glory to God and want to publicly thank everyone in the community and the state for their concerns & prayers… please keep them coming.”

There has been a large response to Carney’s hospitalization from both sides of the isle.

House Democrats released a statement saying they are praying for a full recovery for Carney. “While the legislative process may at times be contentious, we are all one big family that stands together in times of personal difficulties for our fellow members.”

The governor’s office stated, “Governor and First Lady Beshear are praying for Representative Carney and his family and hope he fully and quickly recovers.”

Carney is from Taylor County and is the Republican representative for the 51st District that includes Taylor and Adair counties. Carney was first elected in the 2008 general election. In January 2019, Carney became the Majority Leader of the Kentucky House of Representatives.