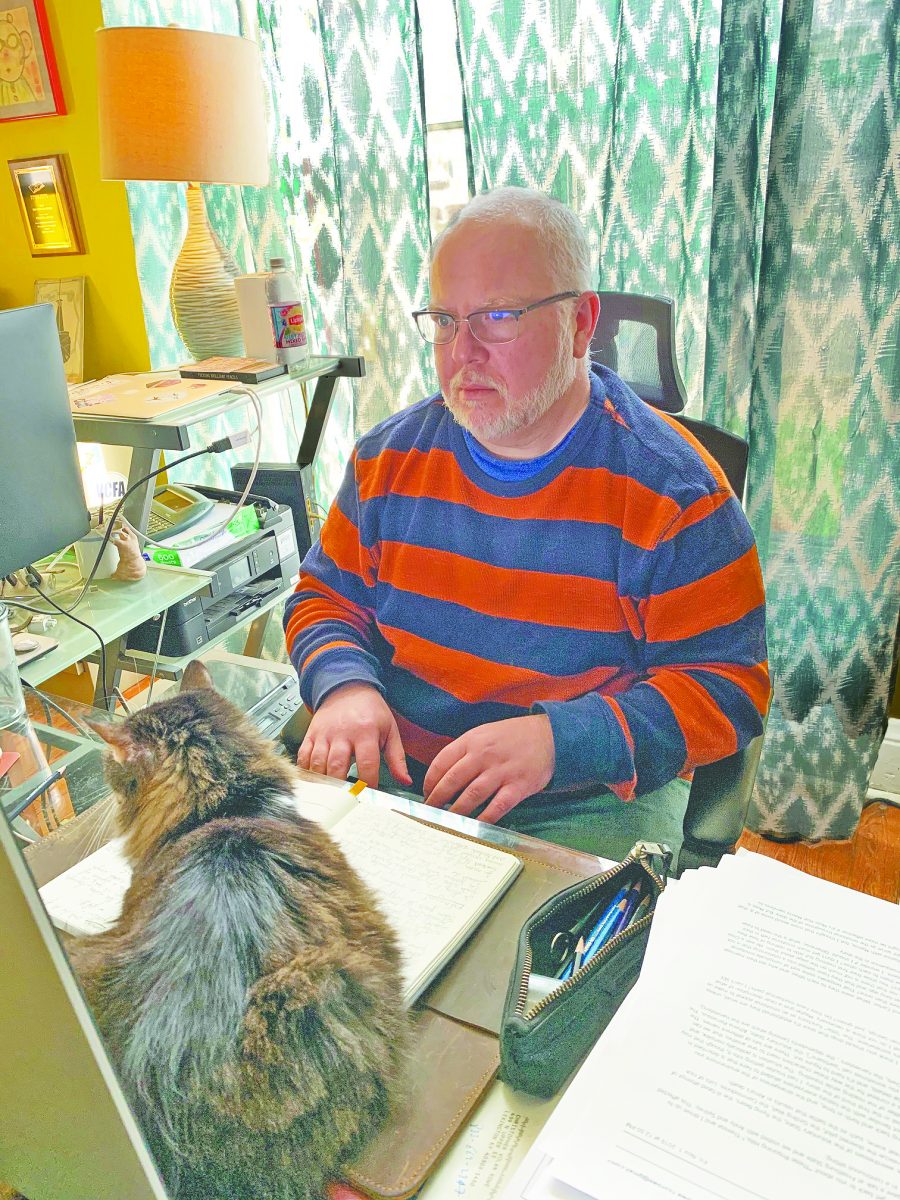 Christopher Rowe at his home office in Lexington, KY being supervised by Phoebe the cat.

Christopher Rowe grew up in Adair County and spent many days of his youth working for his grandfather, Nathan, and his great uncle, Milford, at Rowe Brothers Farm. He worked with his father, Billy, in the tobacco patch, hay fields, and corn fields. He fed calves and could even be found in the milk barn once in a while. He and his brother Fred showed cattle in 4-H. So, of course, Christopher became a writer.

“It was clear from an early age that farming would not be his future,” said his mother Rita Yates. “We both loved to read, and our home was always filled with books. He always had the biggest imagination and could tell the best stories and you would believe them.”

Rowe read voraciously as a boy, with bookshelves piled high in his room and stacks of them on the floor. Most authors say if you want to be a writer, you first have to read everything you can. Rowe has taken his love of reading and transformed it into his career as an adult.

From his century-old home in downtown Lexington, Rowe has carved out a reputation as an imaginative, inventive writer not only with his fans, but among his writing peers as well.

Rowe, who turns 50 tomorrow on Christmas day, is a 1987 graduate of Adair County High School and has a bachelor’s degree in English from the University of Kentucky and a Master of Fine Arts in Fiction from Eastern Kentucky University. He has been writing professionally since 1998 and his career has been on an upward trajectory.

As an author, Rowe has had published 40 short stories, two collections of short fiction, and three novels.

“My next projects are two novellas I’m working on for a major publisher in New York,” stated Rowe. “One is titled ‘These Prisoning Hills’ and, like much of my work, it is set in Kentucky. The other is titled ‘The Navigating Fox.’ After that, I’ll complete my novel ‘The Seventh Simple Machine,’ which is already in progress.”

He has a lot on his plate, but it has been that way for a while now. With each story he has released, demand for his work has increased.

Most of Rowe’s stories are set in the American south and several take place in Kentucky and Tennessee. It is no wonder then that he says his primary influences are two other Kentucky natives, Terry Bisson and Wendell Berry.

His short story “The Voluntary State” was not his first published, but it was one that made a lot of people take notice, garnering nominations for the Hugo Award for Best Novelette and the Nebula Award for Best Novelette, the two biggest awards in science fiction and fantasy. Familiar names such as George R.R. Martin and Harlan Ellison are past winners of these awards.

In the New York Times Sunday Book Review from June 11, 2006, Dave Iztkoff stated, “The Nebula Awards…don’t have a special prize for the speculative work possessing the year’s most striking literary imagery. So I hereby invent the category myself, and declare its first winner to be Christopher Rowe for his story “The Voluntary State.”

The story was included in his most recent book collection of short stories, “Telling the Map.” Published in 2017, it garnered national attention and was a finalist for the inaugural Cornell University Neukom Institute Literary Arts Award. The collection included “The Border State,” the long-awaited sequel to “The Voluntary State.” 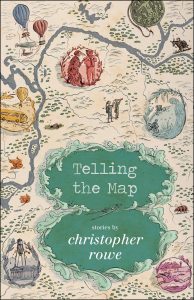 Of the story collection, Gary Wolfe of the Chicago Tribune wrote, “Rowe is endlessly inventive in presenting us worlds that are often dystopian, sometimes funny, but always original – and completely his own.”

Several of Rowe’s stories have been nominated for awards. He has been a finalist for all of the biggest awards in science fiction and fantasy including the Hugo, the Nebula, the World Fantasy Award, and the Theodore Sturgeon Award. He was also a finalist for the Seiun Award in Japan. His story, Another Word for Map is Faith, was also considered for publishing in the volume of Best American Short Stories edited by Stephen King.

While reviews by critics have been good, it is the opinions peers that often hold more weight. George R.R. Martin is one of the most popular writers in the United States today. He is the author of the books the HBO series Game of Thrones is based on. He thought enough of Rowe’s work to hire him.

“A few years ago, I was recruited by George R.R. Martin to be part of his Wild Cards Consortium, a group of writers he selected who publish novellas and short stories in his series of books knows as the Wild Cards series,” Rowe said. This series is the longest running shared universe in the history of publishing. “Beyond what I’ve already contributed to the series, an upcoming book, Joker Moon, is based on one of my ideas and I wrote much of the book.”

Rowe’s stories are also being taught at numerous English departments in colleges and universities around the country, from the University of Kentucky to Boston College, to Vanderbilt University and has been used in graduate programs in geography and computer science.

Two of Rowe’s novels were co-written with his wife of 15 years, New York Times bestselling author Gwenda Bond, a native of Jackson County, Ky. Bond is the author of the first official Stranger Things novel, Suspicious Minds, as well as the Lois Lane series and the Cirque American series.

The writing couple teamed up to create the Supernormal Sleuthing Service, books they wrote together for middle school aged students. The titles from the series are The Lost Legacy and The Sphinx’s Secret. The two are busy with other projects and have no plans at the moment for a third book but haven’t ruled it out.

Not all of his time is spent with pencil and paper in hand. In addition to being a full time writer, Rowe is now teaching English part time at Bluegrass Community and Technical College.

He does try to take advantage of his spare time as well. He is an avid cyclist and loves watching bicycle races and U of L basketball games.

Several of his stories can be found online, including The Contrary Gardner, Knowledgable Creatures, and The Force Acting On the Displaced Body, which begins in Adair County and ends in Paris.

Telling the Map, and the two novels from the Supernormal Sleuthing Service series are available anywhere books are sold. Sandstorm is available on as an audiobook on Audible or an ebook.